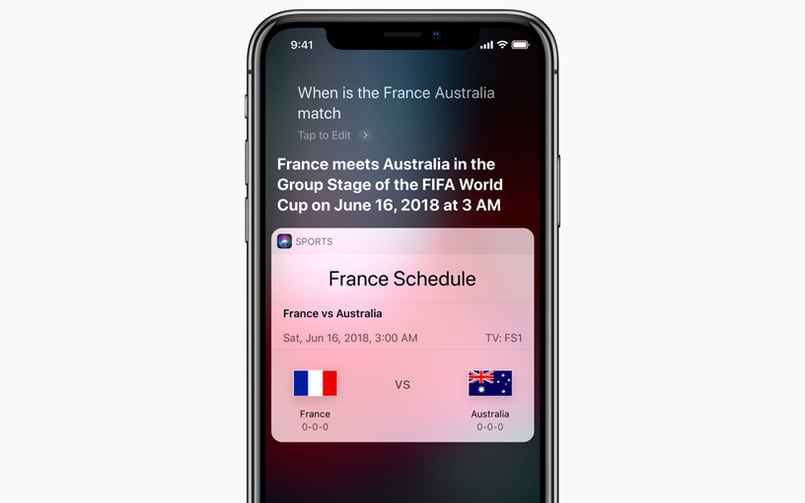 With the 2018 FIFA World Cup starting June 14, Apple has introduced a whole range of features around the biggest sporting event that will help fans stay up to speed with match schedules, scores, stats of their favorite teams and everything else that takes place both on and off field. The new features have been integrated across several of its services including Siri, App Store, News, Apple Music and Podcasts.

Siri already supports football features in 26 countries including India, but today Apple is also bringing that support to other countries such as Brazil, Russia, Denmark, Finland, Malaysia, Turkey, Thailand, Saudi Arabia and Israel. In a press release, the company stated that users can simply ask Siri for match timings, team roasters, scores and more. The questions could be as simple as, “When does France play Australia?” or “Who is on the England squad?”.

READ: football world cup which teams have qualified for qatar 2022

Apple also plans on constantly updating the App store in the month, by highlighting favorite apps and games from football stars. The App store will also be featuring football related apps such as FIFA Mobile and PES 2018, along with popular broadcasting apps such as Fox Now and BBC Sport. Beyond that, the News app will help keep all of the action from trusted sources, in one place. It will make it easy to follow the tournament with up-to-date scores and schedules, a knockout bracket and profiles of the event’s key players from Eight by Eight magazine.

Apple Music will be adding to the world cup spirit by featuring 32 playlists for each participating country. These playlists will consist songs by popular artists of those nations, chosen specifically by the local teams. On the other hand, the Podcasts app will feature an editorial collection entitled “The Beautiful Game”, where users can explore well established podcasters talking about individual matches, players, team strategies and more. Some of the popular ones are “Game of our Lives”, “We Came to Win” and “Men in Blazers.” Even iBooks will feature an editorial collection called “The Beautiful Game”, which will carry books that celebrate the sport and its legendary players.