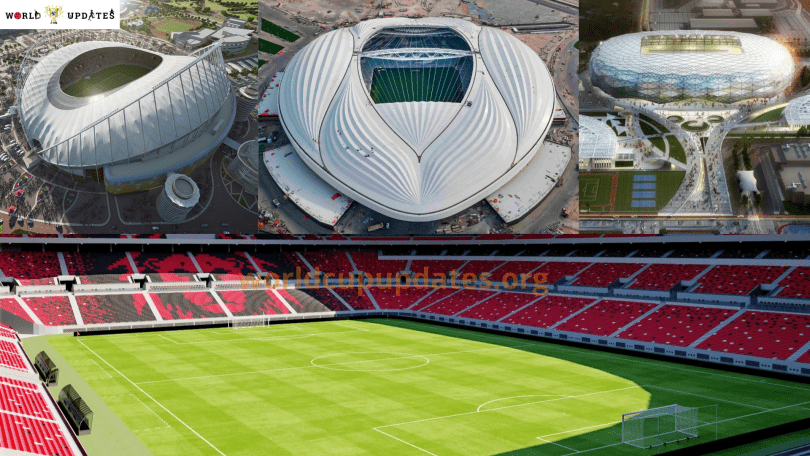 Ten of the eight venues for the 2022 World Cup have already been announced by the hosts Qatar, less than a year away from the global spectacle.

Stadium 974 was inaugurated a few weeks back, and Al Bayt became the latest venue to receive an official opening on Tuesday during the opening of the FIFA Arab Cup.

The 60,000-seat Al Bayt stadium hosted Qatar’s 1-0 win over Bahrain. The venue was designed to resemble the tents historically used by nomadic people in the Gulf. Just under a year from now, the stadium will host Qatar 2022’s opening match.

Heikh Tamim Bin Hamad Al Thani, Amir of Qatar, attended the inauguration of Al Bayt and announced the start of the tournament.

Here are the other stadiums that have already been announced.

Before the Amir Cup 2019 final, in which Al Duhail won the title beating Al Sadd 4-1, the Al-Janoub Stadium opened in Al-Wakrah, Qatar.

Zaha Hadid, a British-Iraqi architect, designed the stadium. Pearl divers from the area traditionally used Dhow boats for pearl diving. The architecture of the building is inspired by these boats. Adding to the sense of being on a ship, the curvilinear roof and exterior evoke Al Wakrah’s history of seafaring. As if a ship’s hull were holding up the roof, curved beams support it.

The Education City Stadium, which can accommodate 40,000 spectators, was opened with a digital ceremony in Al Rayyan, Qatar, by Qatar Foundation. Green materials make up 20 percent of the stadium’s construction, making it one of the greenest stadiums in the world. The company even received a 5-star rating from the Global Sustainability Assessment System (GSAS) in May 2019.

Al Rayyan SC play their home games at the stadium, which has 40,000 capacity, in Al Rayyan, Qatar. Built in 2003, the stadium was renovated in 2016 for World Cup 2022. After renovation, it was launched after Qatar’s 2020 Amir Cup final on National Day.

Al Thumama stadium was inaugurated following the final of the 2021 Amir Cup which Al Sadd won on penalties against Al Rayyan.

Containers make up Stadium 974. A special event was held on November 20, 2021, to celebrate the official unveiling of Stadium 974. On November 30, 2021, on the opening day of the FIFA Arab Cup, the modular stadium, built from shipping containers, hosted its inaugural match.

Stadium 974 will be the first demountable stadium in World Cup history, naturally ventilated and with Advanced Cooling Technology. It will also be disassembled following the World Cup.

During the World Cup, the 40000 capacity stadium will host about seven matches, up to the Round of 16.

At the opening of the refurbished Arab Cup, Qatar took on Bahrain at the magnificent Al Bayt Stadium. A 60000-seat stadium will host the tournament for the 2022 World Cup on November 21 next year. The stadium will host nine World Cup matches next year, making it one of the more important venues in Qatar.