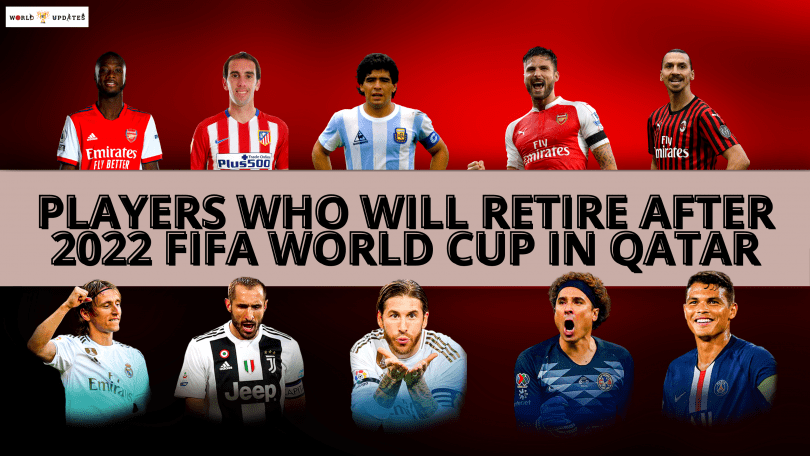 World champions will be crowned as football’s biggest stars join teams in order to compete for football’s most desired trophy. Thus, know about the players who will retire after the 2022 FIFA World Cup in Qatar.

It may be the last World Cup for some superstars, however. The Qatar 2022 tournament will provide the last chance for some players who are on the verge of retirement.

Players who will retire after 2022 FIFA World Cup?

Below, we have written about the players who will retire after the 2022 FIFA World Cup in Qatar. Some of these faces are expected to retire after this world cup. Catch all the latest updates here, so that you do not miss any information related to your favourite players.

The legendary Portuguese center-back Pepe will certainly go down in history.

Today, the 38-year-old is Porto’s captain and still plays. As a center-back, Pepe formed a partnership with Ruben Dias in Portugal’s Euro 2020 squad, playing their four matches.

Fernando Santos’ team is the favorite to qualify for the World Cup even though the qualifiers have not yet concluded.

Pepe’s age and the prospect of young talent makes next year’s competition likely to be his last.

Should Uruguay qualify for the World Cup in November, the centre-back will likely play in his final World Cup.

Playing for Serie A club Cagliari Calcio, Godin has already represented his country three times at World Cups in 2010, 2014 and 2018.

Having fiercely led his country to major tournaments, the 35-year-old captain could be making his final appearance for Uruguay next season.

Ibrahimovic, a footballing legend who calls himself “God”, has almost restarted his career with the national team, having been called up to the squad for Euro 2020.

A foot injury, however, prevented him from taking part in the summer tournament.

Sweden’s qualification for Qatar 2020, and should Zlatan play again for Sweden, could be the former striker’s final campaign at the world stage.

In that case, Giroud might as well call on Karim Benzema for this summer’s Euros.

The 34-year-old France striker played just forty minutes for the team this summer, so he might be playing his last game at the World Cup next year.

The goalkeeper who shocked the football world at the 2014 World Cup in Brazil may retire after next year.

Despite not playing at the first two World Cups, Qatar 2022 will be Ochoa’s fourth World Cup.

In view of Ochoa’s age, next year’s World Cup could be his final tournament.

Despite the legendary spell the Brazilian captain has endured both at club and for country, he might be leading the five-time champions to their last World Cup.

Because Thiago Silva has been injured recently, he is unable to play in Chelsea or Brazil squads, so he could make his career-altering decision after Qatar 2022.

In the history of football, Modric will be remembered as one of the best midfielders. This is the first time in Croatia’s history that a captain has led his country to the World Cup final.

As the most capped player for his country, the 35-year-old may be experiencing his magic creativeness for the last time.

The captain of the Spain national team had a strange season last year with a lot of injuries and the departure of Real Madrid from the Champions League.

Ramos has been omitted from Luis Enrique’s Euro 2020 squad and if he is called up for the World Cup, that might be a final appearance in a La Furia Roja shirt.

It is the second time that Italy has won the Euro 2020 under the legendary Chiellini.

Azzurri captained Azzurri to the World Cup, but that could be his last tournament as well, even though he is 36 years old.

Next year, we will see another legendary Italian play his last game for his country.

For Buffon, the participation in Qatar 2022 would be the perfect farewell to his career. He admitted in July that he wishes to play at the 2022 World Cup.

So, here is the list of players who will retire after 2022 FIFA World Cup in Qatar. Do, let us know in the comments section below, which is your favourite player and whom you will miss the most after their retirement.