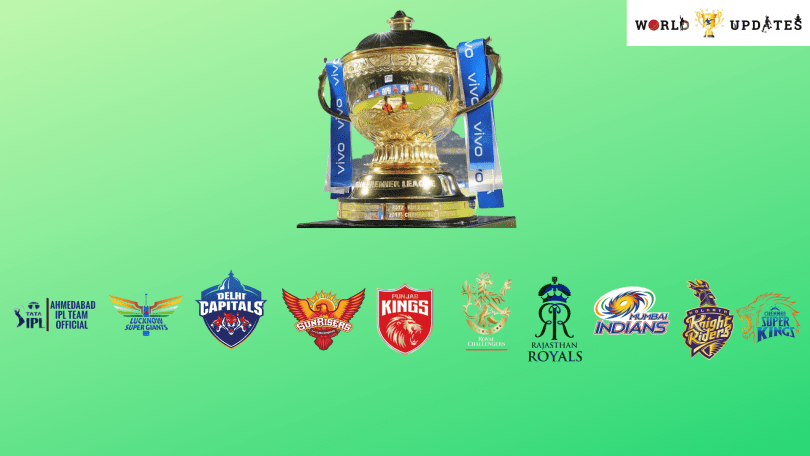 All IPL Team Jersey 2023: The 16th edition of the IPL (Indian Premier League) is all set to start with 10 teams, this year’s match schedule will be longer than the last year’s. In this article we will learn about the IPL 2023 Team Logo and Team Jersey.

Every team will have a their unique team jersey.

Here we have listed all 10 teams’ jerseys and Where to buy links. Following are the details of the IPL 2023 Team’s official jersey.

The Chennai-based franchise has used the yellow jersey for the IPL matches from the very beginning. The jersey will have its sponsor name (Which is still not known for the 2023 season of IPL).

Kolkata Knight Riders (KKR)’s jersey contains full dark blue with a golden bars type pattern. The jersey of the KKR team has three sections, starting the upper, this part is a mixture of blue with golden linings on it. In the middle, the jersey is plain Blue and in the lower section, the jersey is yellow with blue linings.

The Delhi capitals team uses a gradient of blue and red colour for their jersey in the Indian Premier League. Delhi Capitals uses the roaring tiger pattern in the front (chest and stomach part) of the jersey overlayed by their sponsor logo.

The new SRH (Sunrisers Hyderabad) jersey can be seen in the combination of two colours where the sleeve and collar are printed in black with a dotted orange print on it. Bright orange colour is used for the front, back and trousers.

Initially, Royal Challengers Bangalore (RCB) uses a red and Dark Blue combination for their New RCB jersey where they use golden/White colours to represent their player’s name and number.

For the last two seasons, RCB uses a unique jersey where the jersey design has been split into 2 areas where the upper part is printed with dark Blue while the remaining lower part has a dark reddish with some patterns on it. Buy New RCB @399/-