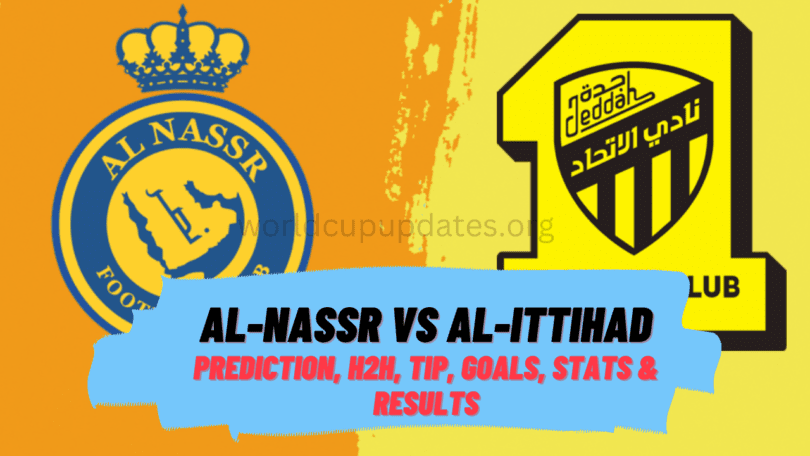 Al-Nassr vs Al-Ittihad: Al-Nassr and Al-Ittihad are professional soccer clubs based in Saudi Arabia. They both compete in the Saudi Professional League, which is the top tier of soccer in the country. Al-Nassr is based in the city of Riyadh and has a long history of success, having won the league title multiple times.

Al-Ittihad, based in the city of Jeddah, has also won several league titles and is considered one of the most successful clubs in Saudi Arabia. Both teams are known for having passionate fan bases and intense rivalries with other teams in the league. Let’s see the prediction and tips for Al-Nassr vs Al-Ittihad FC Super Cup Semifinals.

Al-Nassr Currently stands in 1st position on the table of the Saudi Pro League and has been performing so well so far this season. The away side achieved a 1-0 win over Ettifaq last Sunday and will like to continue this winning streak.

Al-Ittihad, on the other hand, is in third place in the league table at the time and have been in tremendous form this season. The team witnessed a 3-0 win against Al-Feiha in their last game and will try to keep it up this weekend also.

Al-Nassr vs Al-Ittihad Head to Head

Al-Nassr vs Al-Ittihad FC Head-to-Head: Al-Nassr and Al-Ittihad have faced each other many times in past. They played a total of 31 matches with each other, in which Al-Ittihad won 10 matches whereas Al-Nassr won 11 matches. 10 matches were played on a draw.

Tip 4: Players who can score – Ronaldo and Talsica from Al-Nassr, Abderrazak Hamdallah from Al-Ittihad