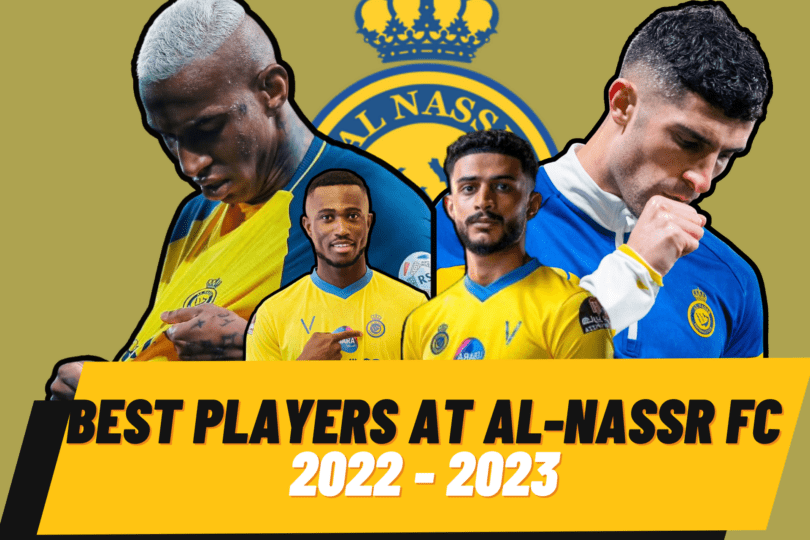 Best Players of Al-Nassr FC: Al-Nassr FC is a football club based in Riyadh, Saudi Arabia. The club was established in 1955 by Zeid Bin Mutlaq Al-Ja’ba Al-Dewish Al-Mutairi and currently plays in the Saudi Professional League, the First Division League in Saudi Arabia.

The club’s recently signed the Portuguese centre forward Cristiano Ronaldo for a Huge Amount of $200 million per season which shocked everyone connected to the football world.

In this blog, we will talk about the Best Players Of Al-Nassr FC in 2023, and no, Ronaldo is not even on this list.

Anderson Talisca is a footballer who currently plays as an attacking midfielder or striker for Al Nassr and the Brazilian national team. He started his professional career in Brazil in Bahia before moving to Europe to play for Benfica in Portugal. Accorfing to FOTMOB.COM Anderson Talisca is currently the best player of Al-Nassr FC

After a successful loan spell with Turkish club Besiktas in 2018, he joined Chinese Super League side Guangzhou Evergrande Taobao and was a key player in the team. He has also represented Brazil at the international level and was part of the team that won the 2019 Copá América. Anderson Talisca also plays for Riyadh-based Saudi Arabia professional football club Al Nassr FC (2019-present).

In the current season, Talisca made 11 appearances for the club, scoring 11 goals and providing 0 assists so far. He quickly established himself as one of the most dangerous strikers in the league and helped the team win the Saudi Arabia Pro League and King Champions Cup.

Ghislaine N’Clomande Konan is an Ivorian footballer who plays as a left-back for the Saudi Professional League club Al Nassr and the Ivory Coast national team is currently the 2nd best player of Al-Nassr FC. He made his debut (professional) in Segunda Liga for Vitória de Guimarães B on 17 February 2016 against Atlético CP.

He made his Premeira League debut for Vitória de Guimarães in December 2016, playing the entire match in a 2–1 win over Boa Vista. Konan was signed for Stade de Reims for a whopping £3.6 million transfer fee from Vitória de Guimarāes in 2017. He made his debut in a 1–0 away win against OGC Nice.

Abdulelah Ali Awadh Al-Amri is a Saudi Arabian professional footballer who plays as a centre-back for Al-Nassr Club and the Saudi Arabia national team currently stands at 3rd postion of the best player of Al-Nassr FC. Al-Amri went through the Al-Nassr youth system. He signed his first professional contract with his club on 27 November 2017.

Vincent Aboubakar is a professional footballer from Cameroon who plays as a striker for the Saudi Professional League club Al-Nassr and is captain of the Cameroon national team. On 26 May 2010, Abubakar signed for Valenciennes in France. He was assigned his shirt number 9 and made his debut as a substitute in the season opener against Nice.

He scored his first goal and hat-trick against Boulogne in the League Cup. After that, he played for several clubs and performed well. On 8 June 2021, Abubakar signed a three-year contract with the Saudi Professional League club Al Nasr. His annual salary was set at 6 million Euros.

Álvaro González Soberón, better known as Alvaro, is a football player from Spain who plays as a centre-back for the Saudi Arabia Professional League club Al Nassr. He started his career with Racing de Santander and played several times for La Liga’s Zaragoza, Espanyol and Villarreal, making a total of 233 appearances and scoring 5 goals.

He signed on loan to Marseille in 2019. Born in Potes, Cantabria, Alvaro came from the youth team of Racing de Santander and made his professional debut in the 2009–10 season for the reserve team of Segunda División B, where he played 23 games before being demoted.

He made his first team and La Liga debut on 1 May 2011, starting 82 minutes in a 2–0 home win against Mallorca. After that, he also played for Zaragoza, Espanyol, Villarreal and Marseille before joining Al-Nasr.

On 29 August 2022, Alvaro signed a one-year contract with Saudi Professional League side Al-Nasr Football Club, with the possibility of another extension.