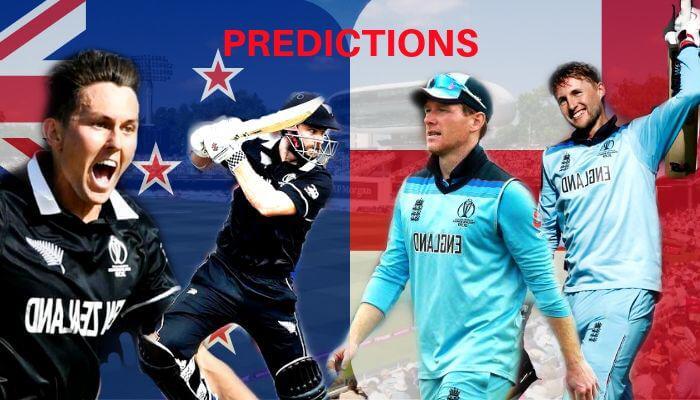 New Zealand are all set to take on England in the final match for ICC Cricket World Cup 2019. Before this match, New Zealand defeated India by 18 runs in the 1st Semi Final and reached this stage. Whereas, England beat Australia by eight wickets in the 2nd semi final to qualify for this match. Now, the CWC 2019 final match New Zealand vs England will be held at Lord’s, London on 14th July 2019.

Before qualifying to the finals, New Zealand finished fourth in the group stage with eleven points. Had they not a better run rate than Pakistan, cwc 2019 final story might have been different. Nevertheless, New Zealand took a sliding path in their campaign to ICC Cricket World Cup 2019 final. First they won all of their four games in the group stage, however in the last five games they were outnumbered due to their bad performance. However, Luck played in to their favor and they defeated India in the first semi final match by 18 runs. Now they await England in the CWC 2019 final match.

Whereas, England took a free fall path in their road to CWC 2019. After winning their first match with great stature, they lost their second match to Pakistan by 14 runs. Ups and down came and finally, England made it into their finals after 27 years. To be honest, the opening pear of Jason Roy and Jhonny Bairstow have been a sign of relief for England. Apart from it, Jofra Archer too played its part with the ball. As a result, England defeated Australia in the second semi final by eight wickets and made it to the CWC 2019 final match. Now, they will meet New Zealand in the world cup finals.

The previous ODI and World Cup history says, New Zealand have been a dominating side against England in the 50 overs limited cricket. So, it will be interesting to see, how these two teams will take on each other in this match.

New Zealand will win. They did satisfactory well in the group stage, but after beating the undefeated team of India in the first semi final, they regained their confidence. Moreover, the skipper Kane Willaimson seems to rocking on the England pitches. However, New Zealand need a brilliant knock from their openers who have been failing in the last few games. Apart from it, Trent bolt and James Neesham will be a great bowling weapon for New Zealand in this final match.

On the other side, England will be looking forward to win this match and lift CWC 2019 trophy. They must win it now, after all those years of good struggle. At least for the sake of England cricket team fans who will be supporting their home side at the home of cricket.

All in all, we are having an epic World Cup 2019 final match, that cricket fans will always remember in their memories.