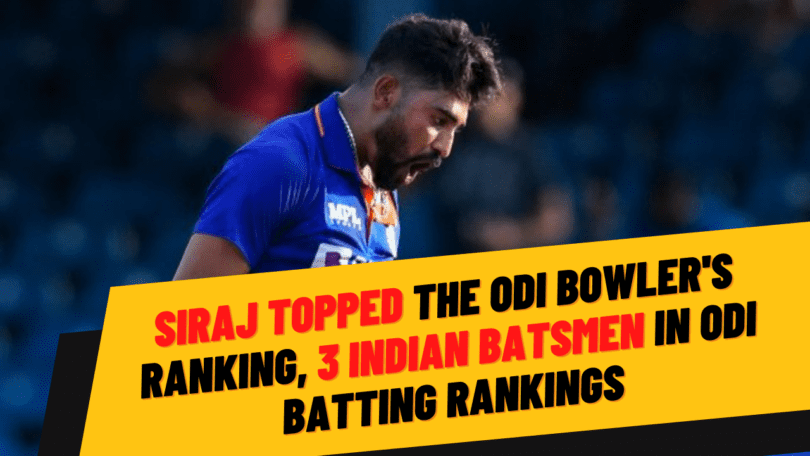 He took nine wickets in three matches against Sri Lanka and took four wickets in the first match against New Zealand. He has 729 rating points while Hazlewood is just two points behind him. Mohammed Shami is in the 32nd position after climbing 11 places. After returning to the Indian team, Siraj has taken 37 wickets in 20 ODIs. He has done consistently well for India.

Siraj, 28, has become the world’s number-one bowler in ODIs for the first time. Paras Mhambrey India’s bowling coach helped Siraj with extra training and worked on several aspects of his performance. They have got the benefit of this. While praising Siraj recently, captain Rohit had said that it is difficult to swing with the new ball and get wickets in the beginning.

At present, Siraj is doing this work very well. He has been a consistent performer and we hope he continues to deliver for the team in the future as well.

After the end of India’s One Day International series against New Zealand, there has been a lot of change in the ICC rankings of the batsmen. Babar Azam, captain of the current Pakistan team continues to lead the ODI batsman rankings, in the recent update three Indian players have joined the top 10. The three players are Virat Kohli, Shubhman Gill and Rohit Sharma.

In-form opener Shubman Gill has jumped 20 places to reach the 6th position after scoring a double century and a century against New Zealand. Virat Kohli is in the 7th position while Rohit Sharma is in eighth place.

Team India has made a clean sweep of the ODI series. Senior players of Team India like Rohit Sharma, Virat Kohli and Mohammed Shami won’t be seen in the T20 series at this time. He has been rested after this series.

In the shortest format of cricket, India and New Zealand have clashed in 22 matches up to this point. During this time, Indian players have a significant advantage over the local team. India has won 12 matches against New Zealand. On the other hand, New Zealand won nine matches against the Indian team. Apart from this, the match is being drawn.