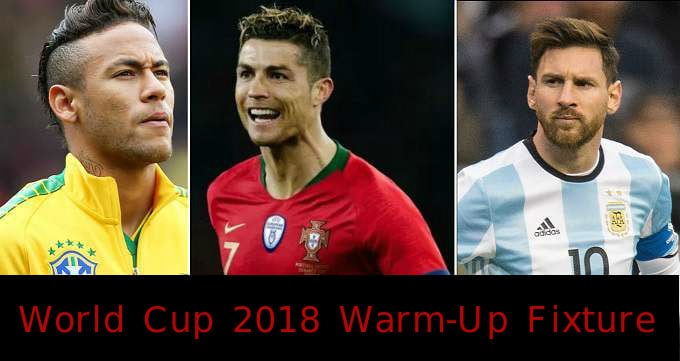 FIFA World Cup gets underway on 14th June 2018 but all qualified teams will be played several Warm-up matches before the big event gets underway. Below is the full schedule of Warm up games scheduled before the world cup. Majority of the teams are playing as many as 3 warm up games starting from 28th May.

Many of the 23-man squads for the tournament will be confirmed in the coming weeks and the friendlies are an opportunity for managers to play around with squad selection, though some will be eager to preserve the fitness of their star players to avoid last-minute injury nightmares on the eve of the competition.

Fifa World Cup 2018 will be held this year in Russia. You can find the official match schedule for 2018 world cup matches from group matches to final announced. Some teams will seen in action before the world cup journey began. Warm-up schedules announced almost all of the team expect (Iran, South Korea and Colombia). All teams will play their warm-up matches during 27th May till 12th June. Saudi Arabia, Egypt, and Morocco will play their all matches in European countries. If there are any changes in the dates or any new warm-up matches schedule announced for the teams you will get full details here.

With news of the 23-man England squad recently announced, manager Gareth Southgate will be able to prepare for his Group G opening fixtures by facing off against both Nigeria and Costa Rica at Wembley Stadium. Twelve days after facing Italy, Southgate’s side begin their World Cup campaign against Tunisia in Volgograd before facing Panama on June 24, with their final group stage game against Belgium on June 28 at Kaliningrad.

France will have a busy run-in to the World Cup with three friendlies against Ireland, Italy and the USMNT. Didier Deschamps still has yet to name his World Cup squad ahead of the June 4 deadline.

Tite’s Brazil squad – led by a fit Neymar and Gabriel Jesus – face will face Croatia and Austria over the course of the week.

Defending champions Germany will be keen on making the best start possible to retain their World Cup title. First facing Austria in Klagenfurt and Saudi Arabia in Leverkusen for their warm-up fixtures, their World Cup begins on June 17 with a Group F fixture against Mexico at Luzhniki Stadium. This will be followed by ties against Sweden on June 23 at Fisht Stadium and South Korea on June 27 at Kazan Arena.

World Cup 2010 and back-to-back European champions in 2008 and 2012 Spain – with a new-look squad that has yet to be confirmed – will be given a chance to exact revenge on Switzerland, who they lost to in the lead-up to their victorious campaign in South Africa.

Australia will gear for their World Cup campaign by playing friendly fixtures in Europe, allowing them to get used to the time zone for this summer. They kick-off their preparations for Russia against the Czech Republic in Lower Austria on June 1, and will then travel to Budapest to face Hungary. Their Group C fixtures open against France on June 16 at the Kazan Arena, followed by a second group stage game against Denmark on June 21 at Samara Arena and concluding with a clash against Peru on June 26 at Fisht Stadium.

Mexico have an intense pre-World Cup schedule as they host both Wales and Scotland in California and the Azteca Stadium, which might be too late for UK viewers to follow – they take place well past midnight  – but will be the perfect opportunity for Mexico fans to show their team support before they head to Russia.

Belgium are also another team who have an intense run-in to the World Cup as they play three fixtures, with the last coming just a week before their opening Group G game against Panama on June 18.

Their final friendly takes place on June 11 against Costa Rica before they face the likes of Panama, England and Tunisia in the Group G stages of the World Cup. The World Cup will begin on June 14.