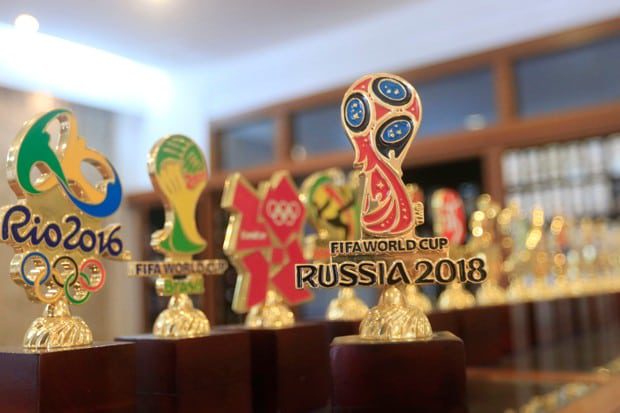 Once every four years the best footballing nations come together to fight it out for the ultimate accolade in the game, the Fifa World Cup. The 2018 finals take place in Russia and feature 32 teams, including England – the only of the home nations to have qualified for the tournament.

For a full month across June and July the TV and radio schedules will be packed with football (sometimes up to four games a day) with many of the most celebrated sporting names in world performing on the biggest stage of all. Expect to see magic from the likes of Argentina’s Lionel Messi, Neymar of Brazil, Portugal star Cristiano Ronaldo, Uruguay’s Luis Suárez, French superstar Kylian Mbappé and England’s very own Harry Kane to name but a few.

When does the World Cup start?

World Cup 2018 begins on Thursday 14th June in Moscow with a game between hosts Russia and Saudi Arabia that kicks off at 4pm BST. The game (as well as the World Cup opening ceremony) will air live on ITV in the UK, as well as being on BBC Radio 5Live.

When does the World Cup end?

The World Cup Final is the last game of the tournament and will take place on Sunday 15th July in Moscow, with Kick off at 4pm.

How can I watch the World Cup on TV and online?

Who are the BBC and ITV presenting teams?

The BBC TV coverage will be fronted by former England star Gary Lineker with Gabby Logan reporting from inside the England camp and further coverage from Dan Walker.

Where is the World Cup being held?

The 2018 World Cup is being held in Russia. Matches will be played at 12 stadiums across the country. They are:

How can I listen to the games on the radio?

There will also be a special World Cup Daily podcast, smart speaker exclusive content and social media coverage – plus the 606 phone-in.

Mark Chapman and Kelly Cates will lead BBC Radio 5 live’s coverage from Moscow, while Robbie Savage will present a daily World Cup Breakfast Show from 8.30am.

Who is in the England squad?

Who is going to win the World Cup? What are England’s chances?

Before a ball has been kicked in the tournament, the favourites with the bookies are Brazil and Germany, with France, Spain and Argentina all also seen as good bets. England are 7th favourites to lift the title 52 years after their only World Cup win – so at the moment, the bookmakers aren’t particularly hopeful that Harry Kane and the third youngest ever England squad will prevail – but that could all change once the matches get underway.