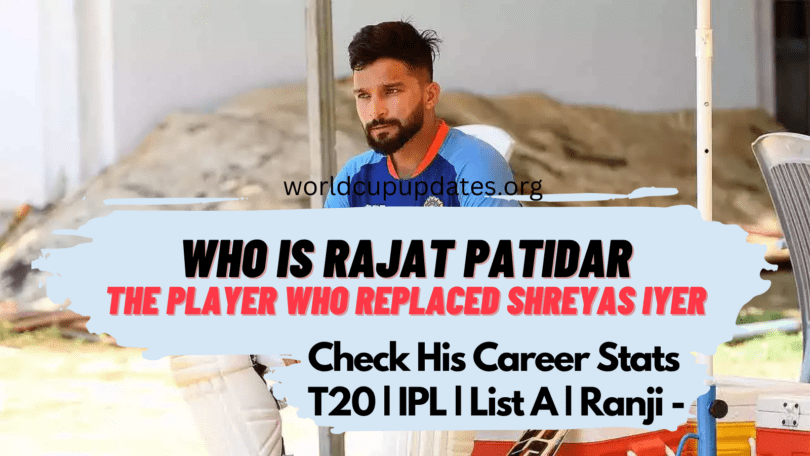 Rajat Patidar replaces Iyer in IND vs NZ ODI series: Even Before the start of the ODI series against New Zealand, Team India suffered a big setback. Middle-order batsman Shreyas Iyer has been ruled out of the team due to a back injury. BCCI has posted the news on their social media account regarding the news.

In the place of Shreyas Iyer, Rajat has been given a chance in the team. Let’s see take a look at Rajat and his record.

who is Rajat Patidar?

Rajat Patidar, 29, is a cricketer from Indore, Madhya Pradesh. He plays for Madhya Pradesh’s Ranji team. For Rajat, the year 2022 has proved to be very lucky for him, as his bat scored a lot of runs.

Due to his performance, he got a place in the series against South Africa. However, he could not get a chance to play in that match. But Patidar will surely get a chance against New Zealand.

Rajat Patidar Ranji Trophy Stats: If we look at the records of this right-handed batsman Rajat, the 2022 season of the Ranji Trophy was very special for him. Where he scored 658 runs in 9 innings of 6 matches at an average of 82.25. While talking about his List A matches, Rajat has scored 977 runs in 13 innings at an average of 88.82. During this, he scored 4 centuries and 5 half-centuries.

Rajat Patidar IPL stats: Even in the Indian Premier League (IPL), Rajat’s bat has sprung up runs like fire. Where he scored 404 runs in 11 innings of 12 at an average of 40.4. During this, his strike rate was 144.29. At the same time, he also scored a century during this period.

He was also part of the Royal Challengers Bangalore team. He played his first IPL match against Mumbai Indians. Although this match was not particularly good for him. In this, he was able to score only 8 runs.