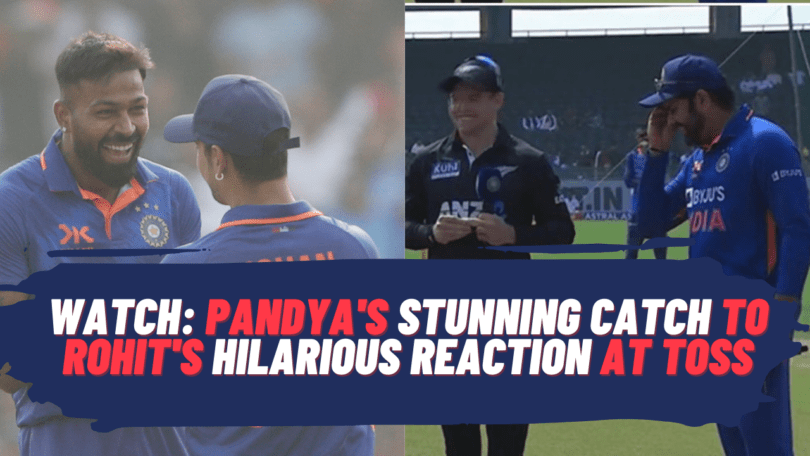 Watch: Hardik Caught and Bowled David Conwey: Hardik Pandya takes an amazing catch on his own ball in the 2nd ODIs Match against New Zealand. In the 9th over of the match, David Conway played Pandya’s ball towards the front in the follow-through Hardik bent down and caught it with his left hand. Even Conway could not believe that the catch was taken Conway stood at the crease in shock for some time. David Convey played a 16 out of 16 inning.

Mohammed Shami stunned New Zealanders in that initial over. Following this, Mohammad Siraj once again took the wicket in the powerplay. Then Mohamad Shami got Darrell out as well. Terry Latham was the target of Shardul in the fifth over.

New Zealand scored only 15 runs off 10 overs and lost 4 crucial wickets. This is New Zealand’s third-lowest score in the first powerplay of One Day Internationals. In past, The team had scored 13 runs in the first 10 overs against Sri Lanka in 2013 and 14 against Australia in 2022.

Watch Rohit Sharma forget what to choose after the toss

Rohit Sharma presented the toss for the second match and won the toss. But after that, what happened was laughable. Unbelievable! The Indian captain couldn’t remember the fact immediately after winning the ball.

As soon as he was about to inform the referee Javagal Srinath his decision to bowl or hit the ball first, he just blanked out. The Indian cricketer was disturbed and having a hard time recollecting the choice. He then paused for fifteen seconds, with his hand conveying to the referee, and finally comprehended that the team management decided to bowl off after winning the toss.