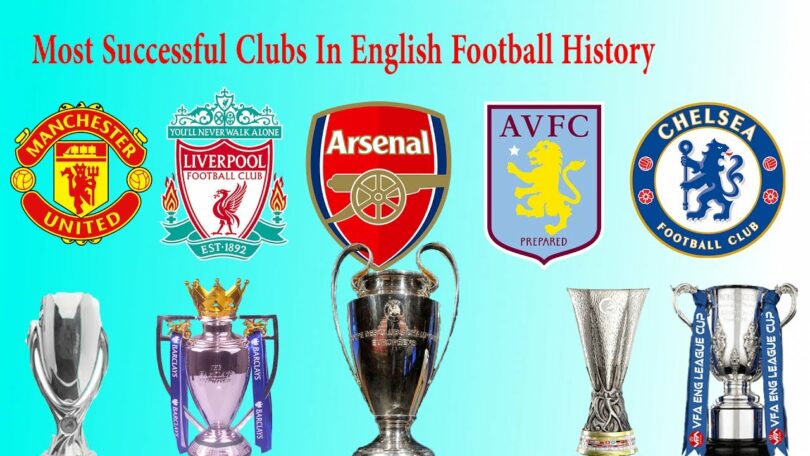 Most Successful English Football Clubs: In the United Kingdom, Association Football is the national sport and this is where the modern set of rules for the code was established, back in the year 1863.

England harbours some of the oldest clubs in the game of football but the question today is Which English Team is the most successful among all others. English football have had a lot of teams that have been successful for multiple years. Certain clubs have been very consistent over the years in ensuring that they stay relevant and keep winning trophies irrespective of which players they have and which manager is running things.

Which is the Most Successful English football Clubs ?

England is one of the great nations in the world when it concerns football and its football top division League is one of the best among Europe Top 5 Leagues. The Country contains many professional and amateur football clubs and today we are here to rank the most successful English football teams.

This our ranking is base on multiple factors but we mainly take into consideration the number of trophies that each club has won.

English Clubs With Most Trophies:

Nottingham Forest is an English club that presently does play in the Premier League. In total, the club has won 13 national and international trophies since its creation and they hold the 10th place in our ranking of the top 10 most successful English football teams.

Nottingham Forest’s last major silverware came in the League Cup in 1990. Of course, the majority of their glory years were under the guidance of the incomparable Brian Clough in the late-1970s.

Forest won the top flight for the first, and only, time in their history in 1978. Back-to-back European Cup triumphs followed. They also won the League Cup in consecutive years, lifting the trophy in 1978 and 1979.

Nothingham Forest has reached the English Premier League title just once till the date of writing this post and has won 2 FA Cups and 4 football League Cup in their history.

At international level, Nothingham Forest is among the few  English clubs that have already won the Champions League ( 2 times) and have also achieved the UEFA Super Cup once.

Yoyoing between the Premier League and Championship, Newcastle fans have been focused on Mike Ashley selling the club and avoiding relegation in recent years. Winning trophies has not been on the agenda for the Toon Army.

What a long wait it has been. The Magpies are one of the best supported clubs in the country, but they have not lifted any significant silverware since the 1950s.

They haven’t even come close either – their run to the quarter-finals of the FA Cup in 2020 was the deepest they have been in the competition since 2006.

Everton is an English club that presently plays in the Premier League. The club was founded in the year 1878 and this makes it 143 years, the name of their stadium is known as the Goodison park with a capacity of 39,414 places.

Everton since their creation, they have won a total of 24 national and international trophies and this puts them on the 8th spot in our list of the most successful English teams. Everton have won 9 Premier League titles , 5 FA Cups, 9 Community shield and 1 UEFA Cup winners cup.

Manchester City is an English club that plays in the Premier League presently and are even the defending title holders of the Premier League. The club was founded in the year 1880 an the name of their stadium is the Etihad stadium with a capacity of more than 55,000 place.

Following the recent achievement and present form of the club it might be difficult to believe that they are just the 7th most successful English football team with a total of 26 trophies.

Aston Villa are one of just five English clubs to have won the European Cup.

Aston Villa is an English club founded in the year 1874 which makes it 146 years. They presently compete in the English Premier League and the name of their stadium is the Villa Park with a capacity of more than 42,000 places.

They also have seven league titles, seven FA Cups and five League Cups and a handful of other trophies to take them up to 25 in total – good for seventh-most in the history of English football.

Like Everton and Newcastle, Villa are on a lengthy trophy drought. Their last major silverware was the League Cup back in the mid-1990s.

Aston Villa since their creation, they have won a total of 25 trophies both national and international.  The club has won 7 Premier League titles, 7 FA Cups , 5 Football League Cup, 3 Community shield, and 1 Champions League.

Tottenham Hotspur is an English club that was founded in the year 1882 and they presently play in the Premier League.

The club has won a total of 26 football trophies since its creation and this places them in the 5th spot of our ranking of the top 10 most successful English Football teams.

Chelsea is an English Premier League club that was founded 116 years ago exactly in the year 1905 and the club presently plays in the Premier League and is among the best clubs in Europe nowadays.

Arsenal also nicknamed the gunners, is an English club founded in the year 1886 and presently plays in the Premier League. The Club’s stadium is the Emirates stadium with a total capacity of 60,704 places.

Liverpool is professional football club that was founded in the year 1892. The club presently comepetes in the Premier League and the name of their stadium is known as Anfield. The club is also nicknamed the REDS.

The Merseyside giants have regained their status as the top team in England in recent years with their recenr League cup win. Liverpool had tremendous domestic success in the 1970s and 1980s. The 2019-20 Premier League triumph was their first in three decades.

Despite struggles in England, Liverpool succeeded in Europe. The Reds have won the Champions League six times. This is the most by any English club. They also won multiple UEFA Cups and Super Cups.

Manchester United presently one of the richest football clubs, was founded in the year 1878 and the club presently competes in the Premier League with Old Trafford being the name of the stadium.

The Red Devils dominated English football under Sir Alex Ferguson. Manchester United have always had great teams. But, most of their success came under the Scottish manager. The club won 13 of their 20 league titles under him. Ferguson also led them to two Champions League triumphs.

Manchester United is the most successful club in England as they have won a total of 66 Trophies since the creation of the club.