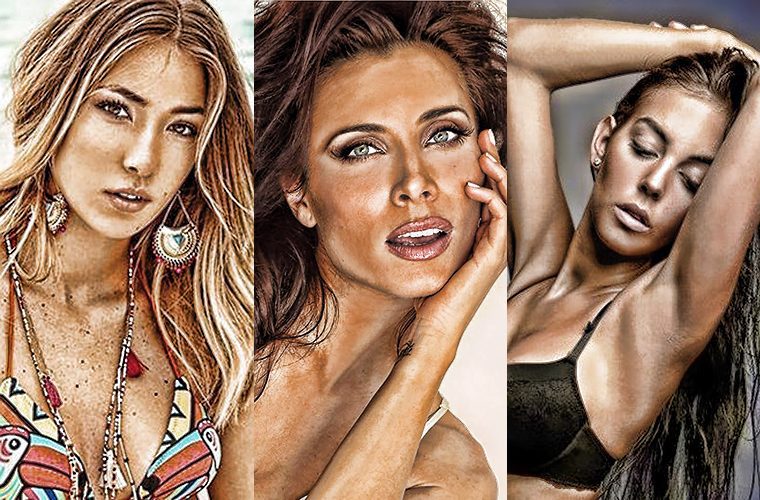 Take your time to read this Top 10 Sexiest Football WAGs. First of all I will explain what does WAGS mean. Wags are wives or girlfriends of sports players, typically characterized as having a high media profile and a glamorous lifestyle.

The football WAGs style was coined by the British tabloid during the 2006 World Cup in Germany, when some English players (hot) wives threw a real lifestyle. These football wags were Victoria Beckham, Coleen Rooney and Abbey Crouch. Be a football wags was almost a privilege before.

Today we take a look at some of the hottest football Wags.

Amra Silajdžic is a model and actress of Bosnian origin born on 1 October 1984. At the young age of 16, she won the Elite Model in Paris. In 2010 she was in the cast of CSI NY and in a video clip of the singer Enrique Iglesias. After being married to a Serbian businessman, Amra Silajdžic is engaged with the strong former Manchester City football striker, Edin Džeko, now playing in Serie A for AS Roma football club.

Edurne García Almagro, known professionally as Edurne, is a singer, actress and TV presenter born in Madrid on 22 December 1985. She was famous after the popular talent show Operacion Triunfo in 2005: her most famous song is Wake up, which reached number five on the Spanish charts in 2006. Edurne has represented Spain in the Eurovision Song Contest 2015. From 2010 she dated one of the strongest goalkeepers playing in England (here English Premier League predictions), Manchester United’s David de Gea.

Pilar Rubio is a reporter and TV presenter from Spain, born on 17 March 1978. After presenting for three years on the talent show Operacion Triunfo, Pilar Rubio has starred in several films and TV series. Since 2012 she is engaged with the historical Real Madrid defender, Sergio Ramos, from whom Pilar Rubio had a son last year.

Alexandra Curran is an English model born on 23 September 1982, fashion columnist of the Daily Mail and wife of former Liverpool captain and current LA Galaxy midfielder Steven Gerrard since 2007. Alex Curran is considered, along with Coleen Rooney and Victoria Beckham, the founder of the WAGs movement for the England football team.

Polly Parsons is a famous English television presenter. She was born February 15, 1984 in Bristol. Parsons dated EastEnders star Sid Owen for six years; Polly Parsons and Owen couple were engaged in 2009, but called it off in 2012. The same year, Parsons started dating the Belgian footballer Thomas Vermaelen playing for FC Barcelona and Belgium National Team, with whom she has two sons, Raff and Ace.

Yolanthe Cabau is an actress of Spanish origin, born in Ibiza on 19 March 1985. After a difficult childhood Yolanthe Cabau moved to Holland where she got into acting for some movies and TV dramas. For three years (2006, 2007, 2009) she was elected as the Sexiest Dutch Woman. In 2010, she married the current Galatasaray and former Internazionale Milan and Real Madrid playmaker Wesley Sneijder.

Melissa Satta is one of the most famous women in the world of football and one of the sexiest football WAGs not only for the Italian fans. She was born in Boston on 7 February 1986 and has become famous thanks to a popular Italian TV program as a show-girl. Melissa Satta was partner of different Serie A football players such as Christian Vieri and John Carew but from 2012 til now, she is engaged to Schalke 04 and former AC Milan midfielder Kevin-Prince Boateng.

England and Watford FC footballer Tom Cleverley married ex-TOWIE star Georgina Dorsett in a star-studded ceremony attended by Wayne and Coleen Rooney. Cleverley has been with the former reality star since 2012 and they welcomed the birth of their first child, daughter Nevaeh, in June 2013.

Icelandic beauty, Alexandra Ivarsdottir, was born Alexandra Helga Ívarsdóttir in 1989. She is quite famous in her native country being a former beauty queen. Alexandra Helga Ívarsdóttir is a beauty pageant contestant who won the title of Miss Iceland 2008, and represented Iceland in Miss World 2008 in Johannesburg, South Africa. Alexandra Ivarsdottir is the hot girlfriend of pro soccer player, Gylfi Sigurdsson, the Icelandic professional footballer who plays for Swansea City AFC as a midfielder.

While it’s difficult to know exactly how long Ronaldo and Rodriguez have been together. The 22-year-old was spotted on a string of dates with Real Madrid star Cristiano Ronaldo towards the end of 2016. Georgina and Ronaldo are expecting their first child together, after Ronaldo’s twins arrival from a surrogate mother.

If you’ve enjoyed this post, please be sure to forward it to your friends! Use the social buttons to share.