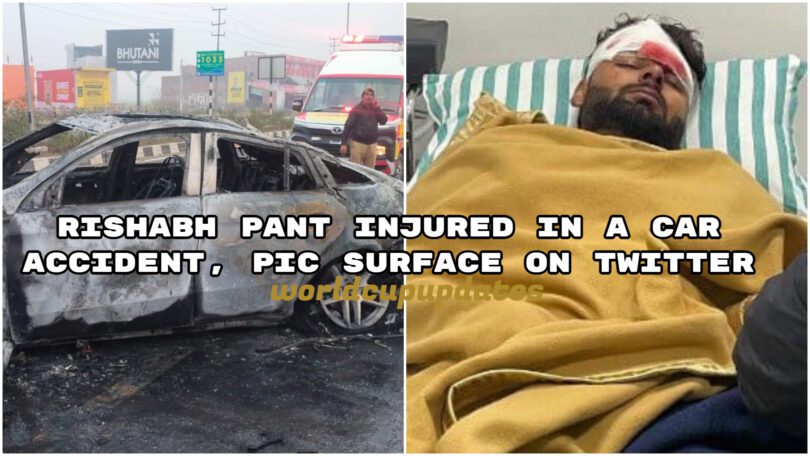 Rishabh Pant accident: Rishabh Pant, The wicketkeeper-batsman of the Indian cricket team and the captain of Delhi Capitals, suffered a major accident while returning from Delhi to Uttarakhand. His car rammed into the median and caught fire near Jala, Hammadpur, near the Delhi-Dehradun highway. Some reports claim he was driving a Mercedes.

According to doctors, Rishabh Pant’s forehead and legs were harmed. Upon being informed, the Superintendent of Police Kishore Singh take the enquiry into his hands. Dr Sushil Nagar said Rishab Pant is now in stable condition and was taken to Max Hospital from Roorkee. There he will undergo plastic surgery.

Vikrant Gupta, the Managing editor at Sports Tak posted the news on Twitter.

ANI Shared the Rishabh pant news on their account:

Poulomi Saha, the news anchor at India Today, shared a picture of Rishabh Pant on her Twitter Handle. Here Rishabh Pant can be seen with a head injury.

Twitter has flooded with the “well-wishes” for the Cricketer.

Rishabh Pant will miss the T20 and ODI series against Sri Lanka?

Rishabh Pant is one of the notable absentees from the ODI and T20I teams in the upcoming ODI and T20 series against Sri Lanka at home when the Board of Cricket Council of India (BCCI) announced the team on Tuesday. India has chosen Ishan Kishan as a wicketkeeper for T20I and ODI while KL Rahul has also been added as a wicketkeeper option for ODI.

Although the BCCI did not mention in its press release whether Pant had been exempted or rested, it appears the power-hitting batsman was required to report to the National Cricket Academy for strength and fitness training.

Reportedly, he was asked to report to the NCA about a two-week knee-strengthening rehabilitation program. As a result, he will miss the entire Sri Lanka series, according to the PTI news agency.
Pant recently played 2 Test matches series against Bangladesh and was a key factor in the team’s 2-0 win. Pants will be crucial to India’s chances in the all-important 4-match Test series against Australia in February-March.

Rishabh Pant, who has always played white-ball formats, was also selected for the 3-match ODI series in Bangladesh in November but returned home a day before the series began, reportedly due to fitness issues.

Pant even led India in the T20I series against South Africa after IPL 2022, but the young wicket-keeper batsman was unable to perform consistently in the shortest time of the game. Pant played 25 T20I in 2022 and had only 364 runs with an average of 21.41.