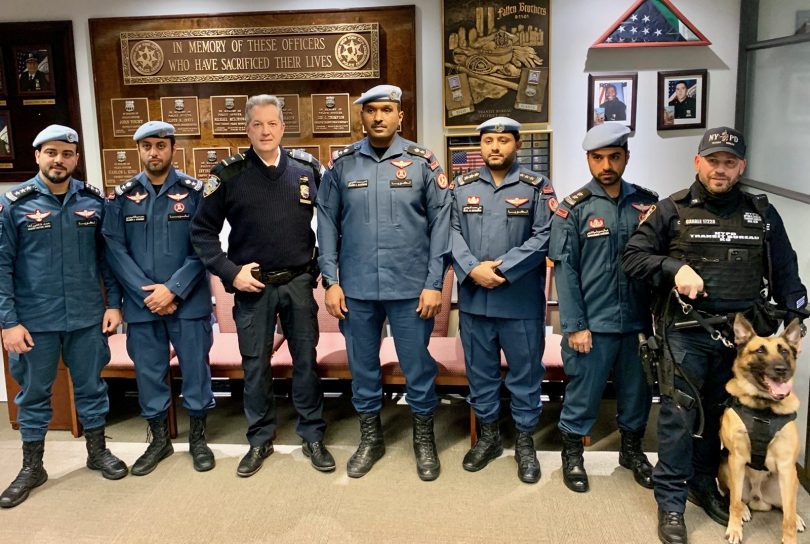 Doha has held talks with its allies while putting the finishing touches on security plans for the much-anticipated sporting event.

“Our thanks go to Lt. Col. Nasser Saad Al-Kuwari and his team for visiting and sharing their insights,” the NYPD Chief of Transit tweeted Kathleen O’Reilly.

Although no details were given on what specific security protocols were discussed and exchanged between the two sides, the meetings come amid Qatar’s preparations for the major sporting event that will take place later this year.

The Gulf state has discussed issues related to World Cup security with some of its allies, including France, Britain and Turkey.

In December, officials from Qatar’s Ministry of Defense Executive Committee for the 2022 World Cup met with British Armed Forces Minister James Heappey in Doha. During the meeting, defense officials discussed Britain’s role in securing the World Cup in Qatar.

As Qatar prepares to host the World Cup later this year, members of the Qatari Police met with our Transit Office team to share best practices for safety and security at major events… pic.twitter.com/uhTPSS6oDp

“The UK and Qatar also recently collaborated on the ‘Watan’ exercise, which tested preparation for the 2022 World Cup,” said a British embassy spokesman Doha News on December 14th.

In addition, the French armed forces confirmed that they would deploy their personnel and materiel to Qatar under an agreement signed between the two countries. This includes the deployment of a BASSALT anti-drone defense system, which will help detect and identify incoming drones.

said France It will also send one of its Air Force’s four E-3F Airborne Warning and Control Systems [AWACS]that can track hundreds of targets.

Meanwhile, Turkey has confirmed that it will send around 3,000 members of its riot police units to Qatar for the World Cup. There are also more than 40 security advisors and search dogs that Ankara plans to send to support Doha.

US Congress to Strengthen Security Co-operation with Qatar

The latest meeting in New York comes amid growing defense ties between Qatar and the US.

Last week the US Congress had issued a statement calling on lawmakers to include Qatar in the National Defense Authorization Act [NDAA] for fiscal year 2022, reflecting the strategic importance of the Gulf State’s role in the Middle East.

“We note that the United States and the country of Qatar have built a strong, enduring and forward-looking strategic partnership based on a long history of mutually beneficial cooperation,” the U.S. lawmakers’ statement said.

After the collapse of the previous government in Kabul, Qatar immediately facilitated the evacuation of Afghans and foreigners in what has been described as the largest airlift in history.

Doha has since evacuated 70,000 people from Afghanistan.

“Qatar’s inclusion in the NDAA for 2022 is, in a sense, the logical outcome of developments and events this year where Qatar has proven to the Americans that they are a reliable partner,” said Dr. Andreas Krieg, an assistant professor at the School of Security Studies at King’s College London and a researcher in Middle East and North African studies, told Doha News last week.

In addition to recent collaborations, Qatar hosts the largest American military base in the Middle East, Al-Udeid Airbase, which is used extensively by the US for its operations in the region.

The allies also signed an agreement during their latest Strategic Dialogue that allowed Doha to represent Washington’s interests in Afghanistan amid the closure of the US embassy following the Taliban takeover last August.

However, despite the recent statement from the US Congress, there have been no updates regarding the delayed approval of Qatar’s requests to purchase four MQ-9b Predator drones from Washington.

Earlier reports said the US Department of Defense is reportedly promoting the sale of over $500 million worth of drones to Qatar, despite a delay by the State Department.

While the Pentagon endorses the sale, the US Department of State has yet to approve the request, although similar requests from other allies, including the United Arab Emirates, have been given the green light.

State Department officials said they are cautious about the sale for fear of angering other Gulf allies, namely Saudi Arabia and the United Arab Emirates.

Qatari officials previously told the Wall Street Journal [WSJ] that they want to use the drones to keep an eye on huge natural gas facilities and to monitor terrorist threats in the region.

Hosting next year’s FIFA World Cup in Doha has also been mentioned in the nation’s request for drones, with officials believing the mega-event needs to be protected from potential attacks.