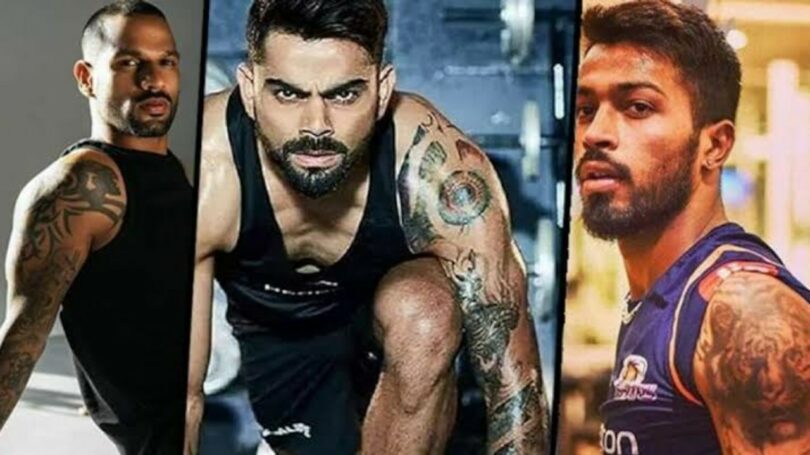 Most Tattooed Cricketers Of All Time: Cricket is one of the most well-known sports practised all over the world, where individuals demonstrate their decency and discipline. However, as time passes, people continue to adapt their style and appearance in order to appear more appealing in the eyes of others.

According to various sources, there are several cricketers who have a significant number of tattoos on their bodies.

Tattoos are designs made in the body by inserting ink, dyes, or pigments, either indelible or temporary, into the dermis layer of the skin. Tattoos are mainly of three types that are decorative, symbolic, and pictorial. People usually make tattoos that have some meaning. Mostly it’s about the thing that they love or admire.

There are few athletes that have a good body with a tattoo on it that represents something they are manifesting or their zodiac sign. So, without further ado, here are the Top 10 Most Tattooed Cricketers Of All Time.

10 Most Tattooed Cricketers Of All Time

Sri Lankan fast bowler Lasith Malinga, on his right arm, has got two dates inked. One is the date when he started playing for the Srilankan Team, and the other one is when he took four wickets in consecutive four balls.

Besides he also has his wife’s name inked on his right forearm. Malinga surely deserves the tenth place in our list of the top 10 most tattooed cricketers of all time. Lasith Malinga has also played for the IPL franchise Mumbai Indians.

Herschelle Herman Gibbs is a South African cricket coach and former cricketer born on 23 February 1974 in Cape Town, South Africa. He is the first player to hit 6 sixes in an Over in ODI. He has embedded a cross and a barbed wire on his right arm.

Michael John Clarke AO is an Australian cricket commentator and former cricketer born on 2 April 1981 in New South Wales, Australia. Clarke is regarded as one of the best batsmen of his generation. He has embedded Justin Langers quote in Arabic in his arm, his parents’ names in Hindi on his ribcage, his test number in Roman numerals across his back, and a guardian angel along with his former finance initials.

Dale Steyn, a South African professional cricketer who represents his country, is widely considered one of the best fast bowlers of his generation. One of the best teams and he is famed for his passion for tattoos, he has tattooed his entire left arm.

After beginning his career in England, he inked three lions on his bicep to symbolise his devotion to his new home. He also wears a large map on his back with 36 red stars and one for each international century.

He always considers those three lions tattooed on his right arm bicep as his most lucky one. The lion inked has always been close to him.

These tattoos on his body surely make him enter the list of the top 10 most tattooed cricketers of all time.

Mitchell Guy Johnson is an Australian former cricketer born on 2 November 1981 in Queensland, Australia. Johnson was considered to be one of the greatest fast bowlers of his era. On his arm, There’s a tattoo of Japanese koi, some cherry blossoms that have a meaning of luck. A cat tattoo on his left torso.

Almost every inscription in ink on KL Rahul is a stunner. His arm sleeve tattoo, for example, features a clock on the inner bicep and a lighthouse on the forearm. While the clock strikes 11 – which is his birth time – the lighthouse is a reminder of home, as he was raised in the coastal city of Mangaluru, KL told Red Bull. But, yet again, it is the detail of his pet dog’s portrait on his back that takes the cake for being the most stunning piece of ink.

Hardik Pandya, the lanky, extremely powerful cricketer – we’ve all seen him smack the ball a long way – has a bunch of tiny tattoos marking various significant factors of this life on his body. Out of them, this lion on his forearm strikes you as one of the best pieces of art on his upper body.

Trumping Virat Kohli’s 11 tattoos, batsman Surya Kumar Yadav has a combined tally of 18 tattoos, including this elaborate arm sleeve. An ambigram of his parents’ names and a portrait of them are two strikingly important tattoos to the Mumbai cricketer.

While there are many small elements all over his upper body, the striking chest-to-forearm sleeve, which is an Aztec design with words hidden in it, is hard to take your eyes off.

Virat Kohli the former captain of ICT and currently playing for Royal challengers Banglore is one of the most well-known aggressive batsmen; he also has roughly 11 tattoos on his body. And every one of them has a profound notion.

He has God’s eye on his left shoulder and ‘OM’ above it, which denotes peace and spiritualism, and ‘Japanese Samurai warrior’ on his left upper arm. Aside from this, he has inked his mother and father’s names, ‘Saroj’ and ‘Prem,’ respectively. There are numerous other minor tattoos which include a lord shiva tattoo as well.

The Japanese samurai warrior is loved by the fans. All these tattoos on his body help him get the 4th position on the list of most tattooed cricketers of all time.