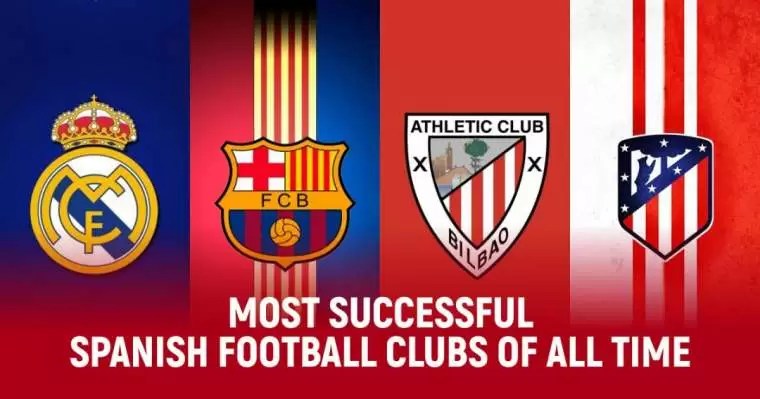 Football is the most popular sport in Spain. The national governing body in Spain is the Royal Spanish Football Federation, which organizes the national football team of Spain, as well as La Liga and Copa del Rey. The National football team of Spain became the champion of the 2010 FIFA World Cup. The most successful Spanish football clubs have some of the best players in the world.

Barcelona is simply the best team in this Spanish league, also the best among all teams in the world! I really admire their teamwork, when it comes to quick passing and setting up attacks… They play as if there were 10 extra players in their squad! Messi, Xavi, Villa, Puyol, etc are players who can’t be described by words… TERRIFIC PLAYERS! Barca always the best!

These players are not only from Spain but also from other European and American countries. The performances given by the Spanish clubs are full of excitement and great talent, and the fans remain glued to their matches. Let’s take a look at the Top 10 most successful Spanish football clubs of all time.

Which is the Most Successful Spanish football team ?

Spain is one of the great nations when it concerns football and its football top division League (Spanish La Liga Santander) is one of the best among Europe Top 5 Leagues. The Country contains many professional and amateur football clubs and today we are here to rank the most successful Spanish football teams.

This our ranking is base on many factors but we mainly take into consideration the number of trophies that each club has won.

So let us get down to our ranking of the most successful Spanish Football clubs of all time.

A total of 4 national titles have been won by the Spanish soccer club RCD Espanyol during their history. As a result, they now occupy a tenth place on our list of the top 10 most successful Spanish football clubs.

As of 28th October 1900, the club was known as the Royal Club Deportiu Espanyol de Barcelona. Barcelona-based RCD Espanyol is also known as the Parakeets or Periquitos because they are based in Catalonia.

A 40,500-seater stadium is the home ground of RCD Espanyol. RCD Espanyol made two appearances in the UEFA Cup finals in 1988 and 2007. As part of the Barcelona derbi, RCD Espanyol faces FC Barcelona. By the end of the 2021-22 season, they had won four La Liga titles.

Five national and international titles have been won by Real Sociedad during their history as a club. We now rank them ninth on the list of the most successful clubs in Spanish football history. On 7th September 1909, Real Sociedad de Futbol was founded.

San Sebastián is home to Real Sociedad, also known as Txuriurdin or the White and Blue. Anoeta stadium seats 32,200 people and is Real Sociedad’s home ground.

To date, they have won two La Liga titles and two Copa del Rey trophies. As of the 2021-22 football season, Real Sociedad has won the Spanish Super Cup.

It was founded as Real Club Deportivo de La Coruna nearly 113 years ago, on 2nd March 1906. Founded in A Coruna, Galicia, Deportivo is also known as Brancoazuis, or The Blues and Whites.

Sixteen of the last 19 seasons have seen the club finish in the top half of the table. Since 1944, Deportivo has played at the 34,600-capacity Riazor stadium. So far, they have won 1 La Liga title and 2 Copa del Rey trophies. As of the 2021-22 football season, Deportivo has won three Spanish Super Cup titles.

A total of 9 national and international titles have been won by the Spanish soccer club Real Zaragoza over the years. In our list of the top 10 most successful clubs in Spanish football history, they are ranked seventh. The club was founded in 1932 in the city of Zaragoza, Aragon, and has been active ever since.

Los Manos (The Aragonese) is another nickname for Real Zaragoza. La Romareda, a 34,596-seater stadium, is where the club plays in Segunda División. To date, they have won six Copa del Rey trophies. As of the 2021-22 football season, Real Zaragoza has won a Spanish Super Cup and a UEFA Cup Winners’ Cup.

There have been 14 national and international titles won by Spanish club Sevilla during its history. Their ranking now stands at sixth place among the top 10 most successful Spanish football clubs of all time. It was founded on 25th January 1890 as Sevilla Football Club in Seville and has been in existence for around 129 years.

As well as Los Rojiblancos or The Red and Whites, Sevilla is also known by its nickname. Till now, they have won 1 La Liga title and 5 Copa del Rey trophies. By 2021-22, Sevilla will have won a Spanish Super Cup and five UEFA Europa Leagues. A UEFA Super Cup title has been achieved by Sevilla once since its foundation.

Throughout Valencia’s history, the club has won 23 national and international titles. In our list of the top 10 most successful Spanish football clubs of all time, Real Madrid now holds the fifth spot.

The club was founded on 18th March 1919, around 100 years ago. Valencia is also known by the nickname Els Taronges or The Oranges. Until now, they have won 6 titles in La Liga and 8 trophies in Copa del Rey.

As of the 2021-22 football season, Valencia has won the Spanish Super Cup and the UEFA Cup Winners’ Cup. During Valencia’s history they have also won the UEFA Europa League once, the UEFA Super Cup twice, and the UEFA Intertoto Cup once. They also have 2 Inter-Cities Fairs Cup titles.

A total of 34 national and international titles have been won by Atlético Madrid in their history. As a result of our rankings, they are the fourth most successful Spanish football club of all time. Around 116 years ago, on 26th April 1903, the club was founded in Madrid.

In their club history, Athletic Bilbao has won 35 national and international titles. Our top 10 list of the most successful Spanish football clubs of all time now ranks them third. Club founded around 121 years ago in 1898 in Bilbao, Biscay, Basque Country, Spain.

Los Leones or The Lions are also nicknames for Athletic Bilbao. La Liga is one of only three leagues in which no club has been relegated. Up to now, they have won eight La Liga titles and 23 Copa del Rey trophies. By the end of the 2021-22 season, Athletic Bilbao had won two Spanish Super Cups.

In their history, Real Madrid has won 96 titles at both the national and international levels. Furthermore, they are now ranked number one on our list of the top 10 most successful Spanish football clubs of all time.

Since 2012, UEFA Champions League and Europa League titles have been won by the club. Besides winning the UEFA Super Cup four times, the Intercontinental Cup twice, and the FIFA Club World Cup four times, Real Madrid is also one of the richest football clubs.

Until now, they have won 26 La Liga titles and 30 Copa del Rey trophies. As of the 2021-22 football season, Barcelona has won 13 Spanish Super Cups and two League Cups.

The vast majority of soccer fans are passionate about club games, as the clubs bring in some of the best players in the world, creating games that are filled with excellent play. There are many great talents and strategies in Spanish clubs, making each match an eye-opener.

Who is more successful, Barcelona vs. Real Madrid?

Barcelona has won more domestic trophies than Real Madrid (excluding defunct tournaments). Their 75 trophies are more than Real Madrid’s 66. Despite this, Real Madrid dominates across Europe. Barcelona, on the other hand, has won 22 European titles.

Which club is the oldest in Spain?

Which is the oldest club in Football?

Sheffield FC is recognized by both the FA and FIFA as the oldest team in the English Premier League. The club was founded by William Prest and Nathaniel Creswick in 1857. As a result, the Sheffield Rules were developed.

Who won the most trophies in Spanish football?