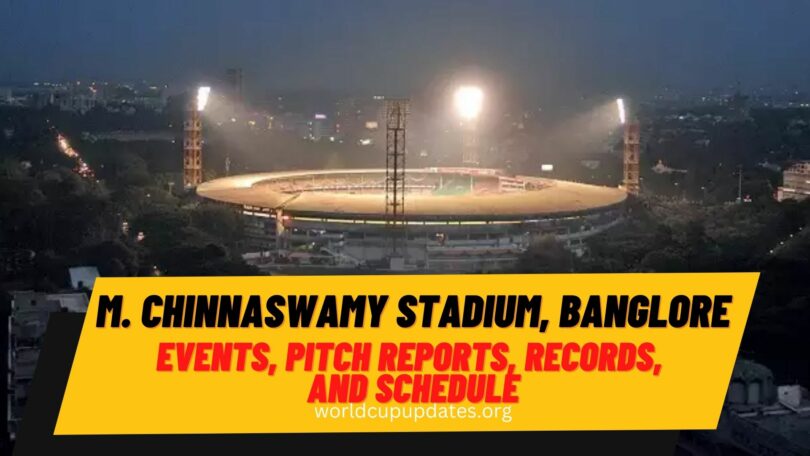 The stadium is the first one in India that used solar panels to generate electricity for the whole ground. The stadium has a seating capacity of over 40000+ people.

M. Chinnaswamy Stadium Events 2023: As far as we acknowledge, There are no events in this Stadium. Follow World Cup Updates to get regular updates on sporting events.

M. Chinnaswamy Stadium Boundry Length: According to Wikipedia the distance from the centre of the pitch to the boundary line is about 53.9496 Meters for both off-side and on-side, 59.436 Meters in straight the back-side.

In M. Chinnaswamy, the N stand, P1, P2, P3, and P Terrace usually cost very high than normal, the price starts from 4,000 for the N stand and may go as high as 37,000 for P2. This doesn’t mean that other stands of the stadium have bad views they are equally good.

If one can’t afford such a high cost next it is suggested to go for C LOWER, B UPPER, and B LOWER stands which are close to the N stand, these stands are Mid-on and mid-off where you can expect most of the sixes.

For the Limited overs game, you should go with any stand. You will get everything perfectly without any disappointment.

A proper guideline of all stands in the stadium is given in the form of images.