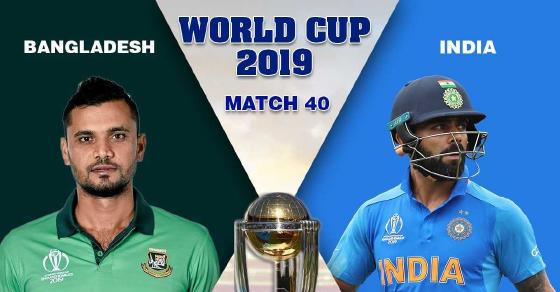 Stay updated with World Cup Updates for all the live score updates, ball by ball commentary & scorecard of Match 40 of 2019 Cricket World Cup between India and Bangladesh

Bangladesh captain, Mashrafe Mortaza, says that he wanted to bat first but also says that it is a not bad idea to bowl first as he would like to chase. On Bangladesh’s transformation in their last 5 years, Mortaza says that the team loves to play do-or-die matches as one has to play at its best. On the team news, Mash says that Mehidy Hasan is not playing and is replaced by Rubel Hossain. Further says that Mahmudullah has not recovered his calf strain and will be replaced by Sabbir Rahman.

Indian skipper, Virat Kohli, says that the reason for batting first is because it is a used wicket. Observes that in the last game it kept getting slower and slower as the match progressed. Wants to put runs on the board. Says that it is a small boundary, hence Kuldeep is not playing. Adds that Kedar Jadhav too, is not playing, with Bhuvneshwar Kumar and Dinesh Karthik replacing them. On his own form, regarding not converting this half centuries, Kohli laughs it off and says that he is just concentrating on contributing to the team’s cause.