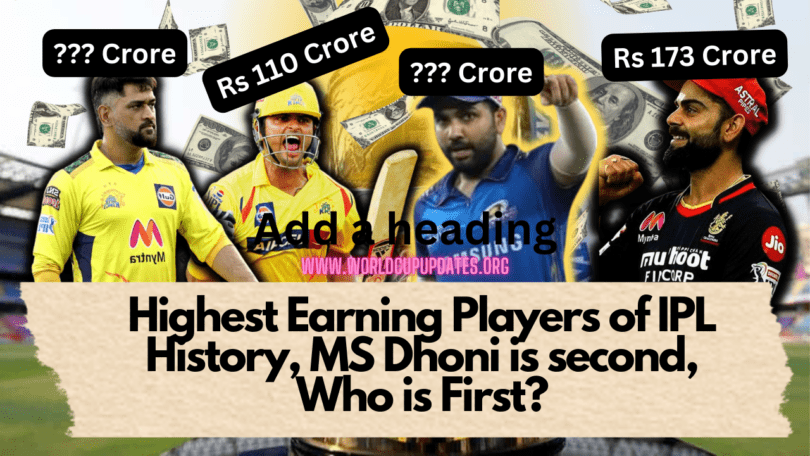 Highest earning players of IPL: Rohit Sharma, the highest earning player in the history of the Indian Premier League, has earned Rs 178.6 crore till the 2023 season, while MS Dhoni will have a whopping salary of Rs 176.84 crore for all IPL seasons. Whereas, Virat Kohli the former Indian Skipper will get Rs 173.2 crore as salary.

Suresh Raina has raised Rs 110.74 crore as salary from IPL, while Sunil Narine the Right-arm spinner from West Indies is in the fifth position with Rs 107.24 crore. AB de Villiers aka. Mr 360 has earned more than Rs 102.51 crore as a salary from the league.

It will not be wrong if we call the Indian Premier League the Indian Paisa League because players get a lot of money through the league. Many international players have also raised a huge salary of more than Rs 100 crore from IPL. Even for the 2023 season of IPL, many players have been sold for more than Rs 15 crores.

Here is the list of Highest earning players of IPL History:

Follow us on Google News For More Sports News

If the salary till IPL 2023 season is combined, the former skipper of the Indian cricket team and the current captain of Chennai Super Kings CSK MS Dhoni has slipped to second place. At the same time, Mumbai Indians captain Rohit Sharma has confirmed the number one spot on the list.

In this list, Virat Kohli the previous skipper of ICT is in the third spot, while Mr IPL, Suresh Raina’s name is at number four. While in the 5th position, Ravindra Jadeja stands with Rs. 109 Cr. Two foreign players are also included in this list, Sunil Narine, and AB de Villiers.

According to the media sources, Rohit Sharma got around Rs 3 crore from Deccan Chargers for every season for the first three seasons of IPL, while he got Rs 9 crore to 9.50 crore lakhs from Mumbai Indians for the next 3 seasons.

On the other hand, MS Dhoni, got Rs 6 crore per season for the first three years, while for the next year he got Rs 8.28 Cr annually. In 2014-15, he got 12 crores per season from Chennai Super Kings and for the next two seasons.