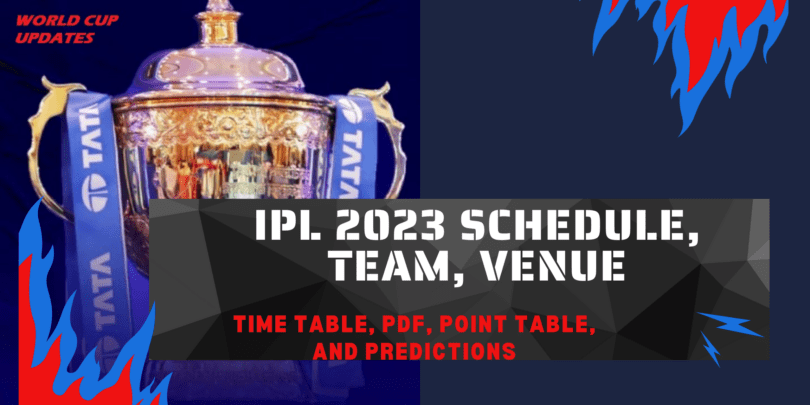 IPL 2023 Schedule: The Indian Premier League (IPL) is a professional 20-20 cricket league in India. The Tournament usually takes place during April and May of every year by teams representing eight different cities in India. IPL 2023, also known as IPL 16, is about to take place from March 26th to May 28th, 2023. In this article, we have mentioned the IPL 2023 Schedule.

Typically, IPL 2023 schedule consists of a group stage, where each team plays every other team in their group twice, followed by a knockout stage consisting of the playoffs and the final. The group stage usually lasts for about six weeks, with the knockout stage lasting for another two to three weeks.

In the group stage, each team plays 14 matches in total – 7 at their home stadium and 7 away. The group stage schedule is usually structured such that each team plays a match every other day, with some exceptions for doubleheaders on certain days. This allows for a relatively balanced schedule, as no team has to play too many matches in a row without a break.

The auction for the IPL 2023, takes place on 23 Dec 2022. The mini-auction is an event where teams can bid on players who are not part of any team in the IPL, as well as players who have been released by their previous teams.

The mini-auction usually takes place a few months before the start of the IPL season and is an opportunity for teams to bolster their rosters with new talent. Teams are allowed to spend a certain amount of money on players during the auction, and the player goes to the highest bidder.

In the mini-auction of IPL 2023, the auction witnessed a huge flow of money. There are four players who bagged over INR 15Cr in the mini-auction. Sam Curran, Cameron Green, Ben Stokes and Nicholas Pooran bagged INR 18.50 Cr, 17.50 Cr, 16.25 Cr, and 16 Cr respectively. (Read More: 3 most expensive buys in the history of the Indian Premier League)

IPL 2023 will be held in India at ten different places this year. Each club will have a home ground and will be able to take advantage of the home ground in the stadium. In total, each team has 7 matches played at home, the remaining 7 matches are played away.

Below is a list of IPL 2023 stadiums and their Locations:

The knockout stage of the IPL consists of three playoffs: the eliminator, the qualifier, and the final. The eliminator and qualifier are between the teams that finish third and fourth in the group stage. The winner of each of these matches advances to the final. The final stands between the winner of the qualifier and the team that finished first in the group stage.

The precise date of the IPL 2023 has not yet been announced by the officials. However, according to sources and pre-guesses, the IPL 2023 may begin in the last week of March.

On 23 December 2022 BCCI held the Auction for IPL 2023, the leftover Auction will be conducted soon.

Who will win the 2023 IPL championship?

Based on last year’s results, The CSK, LSG, GT, and MI are the 4 clubs that can give competition with each other in the upcoming IPL 2023 season.

The TATA IPL 2023 will be broadcast on which TV channel and OTT?

Star Sports has secured the television rights as of 2023, and Viacom18 (Voot App) owns the digital rights.