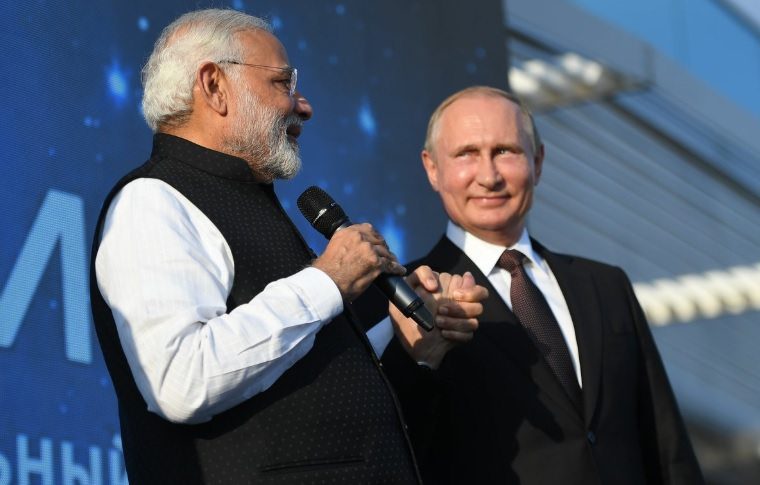 Indian Prime Minister Narendra Modi wrapped up a whirlwind month of diplomacy with a trip to Russia Monday, where he embraced President Vladimir Putin and hailed the two countries’ strong relationship. “Russia is India’s old-time friend. We share long-standing historical ties, and Mr. President is my personal friend and a friend of India,” Modi said at the Black Sea resort city of Sochi.

“For the past four years, you and I stood side by side in the bilateral format and on the international stage … I am very glad that it was so.”

PM Modi congratulated Putin on hosting the FIFA World Cup 2018 which is set to begin next month and will run for 31 days in 11 cities of Russia. He also hoped for the successful organization of this mega event that will feature World’s best 32 teams including hosts Russia.

PM Modi: I Congratulate you for 2018 FIFA World Cup

Both personalities discussed on a range of bilateral topics, including defense cooperation as well as global issues of common concern. Prime Minister also enjoyed a yacht-ride in the Black sea of the Atlantic Ocean situated in Eastern Russia along with Russian President.

In his statement, PM Modi said

The entire World is eagerly waiting for the FIFA World Cup 2018 and you are going to organize the event. You will be at the center of the World’s attention and I congratulate you for that.

Meanwhile, official sources told PTI the issues on the table may include the economic impact on India and Russia in the wake of the US president Donald Trump pulling out of the Iran nuclear deal, the situation in Afghanistan, Syria, the threat of terrorism and matters relating to the upcoming Shanghai Cooperation Organisation (SCO) and BRICS summits.

The sources further said the possible impact of the US sanctions against Russia under Countering America’s Adversaries through Sanctions Act (CAATSA) on India-Russia defence cooperation may also figure during the talks between the two leaders.

The sources said the large part of the informal meeting between Modi and Putin will be one-to-one and there may be limited segment for restricted delegation-level discussions. They said Putin will to also host a lunch for Modi.

The 21st edition of Football World Cup will be played from 14 June to 15 July 2018. Check the full schedule of the tournament. Russia is hosting the tournament for the first time in history. Germany is the defending Champion. What do you think who will win this time?