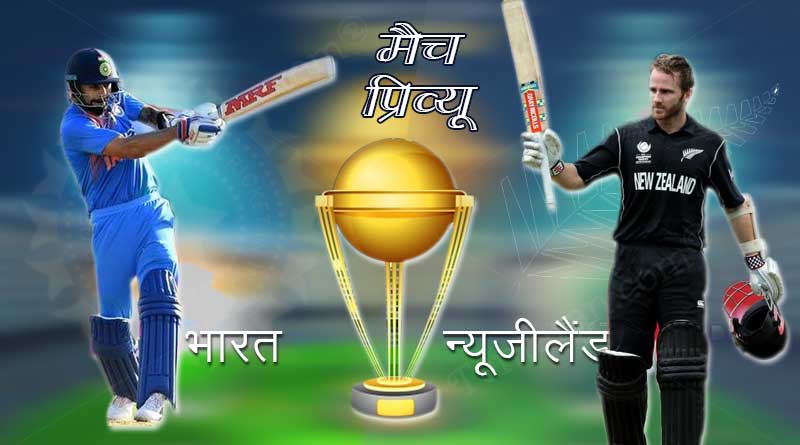 So far, India remain the unbeaten side in ICC Cricket World Cup 2019. They have played two games till now in CWC 2019 and won both of these matches. Hence, they account four points at the fourth slot on the table. In the previous match, India set 352 for 5 runs target while batting first against Australia. Shikhar Dhawan struck a magnificent hundred in this match of 117 tuns on 109 balls, while Virat Kohli played a beautiful innings of 82 runs. However, Australia failed to chase this total and collapsed at 316 all out in the last over. As a result, India won this match by 36 runs. Now, they will face New Zealand in this world cup match.

Whereas, New Zealand too are the undefeated team in CWC 2019. They have participated in three matches and won all of their fixtures. Therefore, they stand top the table with six points. In the previous match, Afghanistan posted 172 runs target due to poor batting display, while batting first against New Zealand. However, the Kiwi team run down this total in the 32nd over with seven wickets in hands. As a result, New Zealand claimed victory in this match by seven wickets. The kiwi Skipper Kane Williamson smashed an unbeaten innings of 79 runs. Now, New Zealand will meet India in this CWC match.

Both teams are equal in match and it is hard to say, who will win this match. So, we take a look on previous record between these two teams. India have more victories against New Zealand in ODI format, however, the Kiwi team leads India in world cup meet ups by four victories in seven matches.

India will win. After their previous victory against Australia, they are high in spirits and they can easily defeat New Zealand in this match. However, Shikhar Dawan has been ruled out world cup due to an injury and India needs to fulfill his place. If the top order provides a stable start with middle order taking the responsibility for a big total, India are pretty much in this game.

On the other side, New Zealand need to maintain their top slot, so they will be looking forward to win this match. So far, their campaign have been on the right path and now they must beat the strongest opponent in CWC 2019. All in all this is going to be an epic match between these two sides in World Cup.

New Zealand will win. They might to choose to bat first, or invite India to play early, depending on the pitch and weather conditions. Albeit, Toss will play an important role in the victory of the winning side.

Both India and New Zealand have won all their matches so far and would aim to build on their ICC Men’s Cricket World Cup 2019 form when they clash on June 13 at Trent Bridge in Nottingham.  While New Zealand have defeated Sri Lanka, Bangladesh and Afghanistan so far while India have won their matches against South Africa and Australia. India will be without their regular opener Shikhar Dhawan. KL Rahul is expected to open the innings with Rohit Sharma while Rishabh Pant, Vijay Shankar or Dinesh Karthik my bat at No. 4.

Wicket-keeper: MS Dhoni has played important innings in both matches for India so far.

Batsmen: Virat Kohli and Martin Guptill are must haves while Kane Williamson and Rohit Sharma are also big players. KL Rahul back at the top could be the X-factor.

Allrounders: Hardik Pandya and Jimmy Neesham are the best allrounders in these two sides.

Bowlers: Jasprit Bumrah, Bhuvneshwar Kumar, Yuzvendra Chahal and Lockie Ferguson will the ones to watch out for with the ball.

IND vs NZ My Dream11 Team

India vs New Zealand Match Prediction: Who Will Win IND vs NZ Match?

The 18th match of the ICC World Cup 2019 will be played between India and New Zealand. India defeated Australia by 36 runs in their second match of the championship while the Aussies faced their first loss at the prestigious Kennington oval. They’ve played three ODI matches up until now. What makes this victory special for India is the fact that Australia and India are both at par in terms of their form at the moment. India marked their 50th ODI victory against the Aussies and scored a whopping 352!

India is all set to take on New Zealand in the 18th match of the ICC World Cup 2019. New Zealand has also been performing well this time around and cannot be taken lightly. However, having defeated the defending champions in their previous cwc match, team India will be in good spirits to take on the black caps. Will Dhawan score another century? Will the black-caps break India’s winning streak? Who do you think will win the IND vs NZ Cricket Match of the ICC World Cup 2019? Let’s find out what Ganesha has to say about the 18th match of CWC 2019.

As per Ganesha’s readings, the team to win the IND vs NZ toss will be New Zealand. What do you think? Who will win IND vs NZ cricket match though? Who will outplay the other?

According to Ganesha, the winner of the 18th cricket match between India vs New Zealand, the ICC World Cup 2019 will be India.