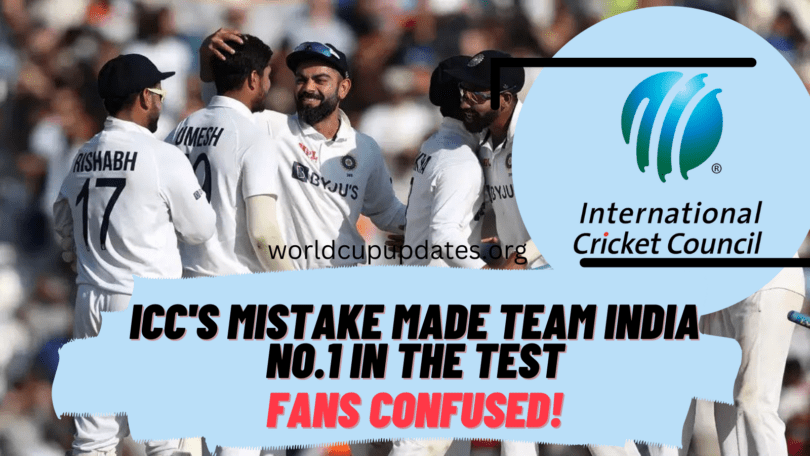 But wait here is the twist in the story

ICC Test Ranking: When the ICC updated the Test team’s standings on Tuesday, cricket fans around the country were overjoyed. India is at the top with 115 points. While 15 points were reduced from Australia due to which Aussies came to second place. Cricket fans were excited by the news. But the joy didn’t last too long as about an hour after the news trends, the ICC updated its ranking which broke everyone’s heart.

Last month, India defeated the visiting team 2-0 in the 2-Test series on the Bangladesh tour. In contrast, Australia won by 2-0 in the three-Test series against South Africa at their home ground. The third and final match of this series was a draw. Let us tell you that India is already number 1 in the T20 International rankings.

India Will Play 4 Test-Series Against Australia.

But after this series, it will be decided whether Team India will reach the finals or not. If we look at the table points of the ICC World Test Championship, India is at number two. But South Africa, which is currently standing in third place, will be a tough competition here. If the Indian team successfully defeats Australia, then apart from reaching the final of the World Test Championship, it will also stand in first place in the ICC Test rankings.

IND vs NZ 1st ODI Live Streaming: The three ODI series between India and New Zealand is going to start on 18 January. The first match of the series will be played in Hyderabad. The New Zealand team reached Hyderabad on 16 January. The Kiwi team will play an ODI here for the first time.

Exciting matches will be seen during the ODI series between India and New Zealand. Because both the teams have won their last ODI series. The Kiwi team has come to the India tour after defeating Pakistan. Whereas, Team India defeated Sri Lanka in the ODI series.