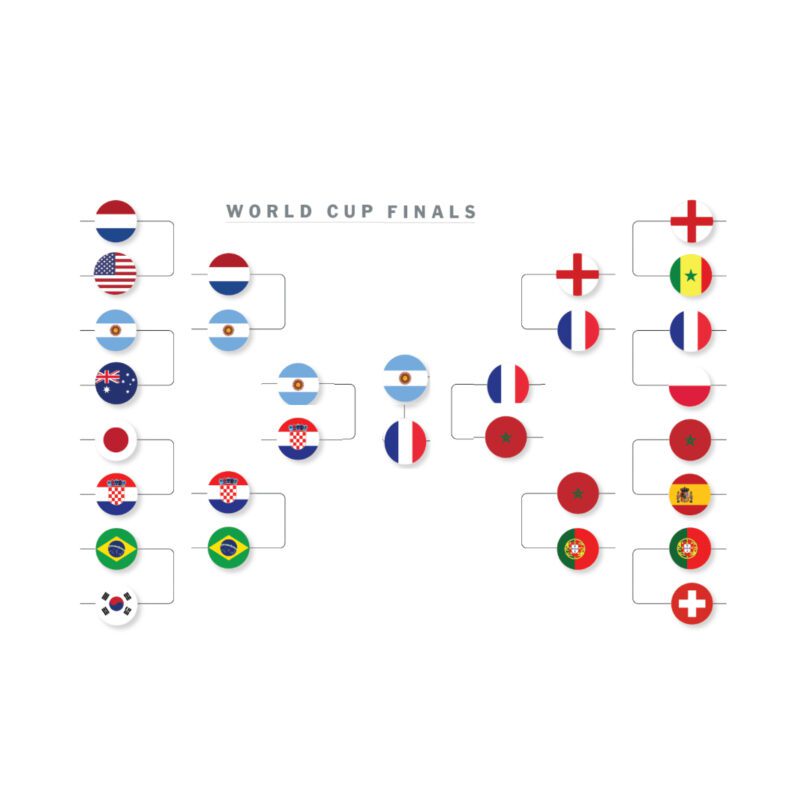 32 teams start the 2022 FIFA World Cup with one goal:  to qualify for the knockout stages.  Any player and manager will tell you that in the knockout round, anything can happen. That’s why teams don’t care how they get there. They just want to go there.

Some tracks will prove to be easier than others in “RO16” depending on whether the teams qualify and the final pairs. The matches of the “R016” are all predetermined. The teams rank themselves according to their rank in their respective groups.

The winning nations of their group are paired with another group runner-up in the RO16. A favourable first game can really put a team on the right track.

WorldCupUpdates covers everything you need to know about the upcoming “RO16” games.

Round of 16 Matches and their results:

The Round of 16 ends with a heated match as Morocco beats Spain in Penalty Shootout by 3-0. In an absolutely one-sided Match where Portugal ruined Switzerland’s dream of Quarter-finals by beating them to 6-1.

All the team will now fight for the semi-finals. Here is the list of all the Quarter-final matches with their schedule and venues.

After a tremendously heated Quarter-finals, FIFA fans are eagerly waiting for the semi-finals.

In the first FIFA 2022 Quarter-final match, Croatia beats brazil in a penalty shoot-out. The first 90 minutes of the game went without any goal. After that, 30 minutes of extra time were announced, in the 106th minute, Neymar escaped the Croatian defence and scored the first goal of the match. Soon after that, in the 117th minute, Bruno Petkovic scored an equalizer. The game went into the penalty shoot-out and Croatia won it by 4-2.

The same goes in the second match of the day where Argentina beats the Netherlands in the penalty shoot-out.

The second day of the Quarter-finals was somewhere one-sided, in the first match Portugal were unable to break the Moroccon defence, whereas Morocco scored the single goal of the match, resulting in Portugal going home.

Same day in another game France defeated England by 2-1, the penalty missed by Kane was a result decider. If Kane would score the goal, fans would have witnessed another penalty shoot-out and the result would be something else.

After all the quarter-finals drama, now everyone is waiting for the semi-finals. Here is the FIFA World Cup 2022 Semi-finals schedule:

The result of the first FIFA World Cup 2022 Semi-final match is out and Argentina is already in the finals of the FIFA World Cup 2022. Argentina defeated Croatia by 3-0 at Lusail Iconic Stadium on Dec. 14. Fans are waiting for the next game which is FRANCE vs MOROCCO, scheduled to be conducted on 15th December in Al Bayt Stadium at 12:30 AM (IST).