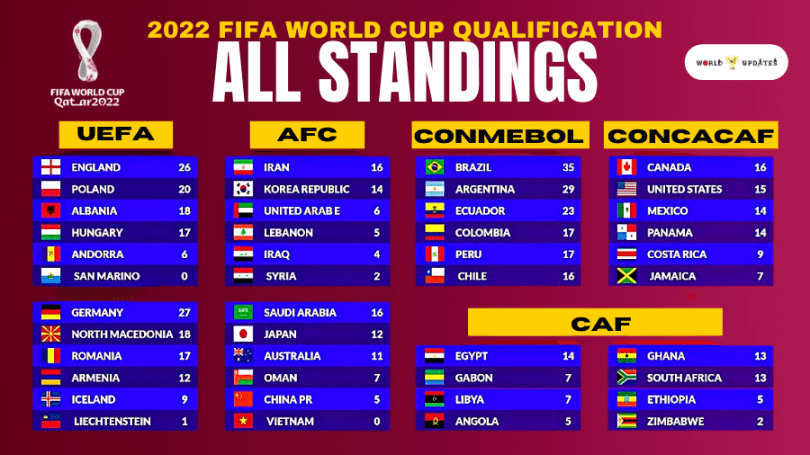 Lionel Messi’s Argentina have become the latest former champions to book a ticket for the FIFA World Cup in Qatar a year before it begins. South America’s representatives secured a spot in the tournament after Argentina and Brazil played out a goalless draw. The 22nd World Cup will feature former champions Brazil, England, Germany, France, and Spain.

We take a look at the confederation-wise qualified teams and those who can make the trip to Qatar as the first qualification phase for the 2022 World Cup approaches its end. The FIFA World Cup 2022 is scheduled between November 21 and December 18.

With 32 teams competing in the World Cup, it may be the last time this happens. FIFA is already working on expanding the event to 48 teams in 2026, when it will take place in the U.S., Mexico, and Canada.

How many national teams have so far qualified for Qatar 2022?

In total, 13 teams will represent UEFA at this year’s World Cup. From the European Qualifiers, 10 group winners receive direct qualification spots, with the remaining three spots being determined by play-offs.

The ten groups are listed below. In the play-off bracket are the 10 group runners-up, as well as the two best-ranked group winners from the Nations League, who failed to qualify directly or finish second.

Africa can qualify five teams. In the second round, the top 26 continental teams joined 14 teams in ten groups after the first round, which featured 28 teams. Only after the third and final round of African Qualifiers in 2022 will we know which teams will go to Qatar. In addition to Algeria and Tunisia, Nigeria and Cameroon have qualified for next year’s play-offs, as well as Egypt and Ghana.

The ten teams will compete over two legs for five available slots. The third round opponents will be determined by draw.

In the 10-team South American Qualifiers, four South American teams are guaranteed direct berths, while the fifth-place team gets a chance through the inter-confederation play-offs. The two-legged playoffs will be held on June 22.

There will be four direct berths for Asian teams. The inter-confederation play-off will give another team a chance to qualify for the World Cup. It was automatic qualification for Qatar. So in theory, there can be six Asian teams taking part in the 2022 edition.

Qatar qualified as the host nation.

FIFA World Cup 2022 will be contested by the two best teams from each group of six teams. In the third round, the two third-placed teams will compete for a spot in the inter-confederation play-off. Each match will be played once.

The following teams will compete in the third round:

Members of Group A include Lebanon, Iran, Iraq, South Korea, Syria, and the United Arab Emirates.

North and Central America, and the Caribbean (CONCACAF)

CONCACAF gives three teams direct entry to the World Cup 2022, with a fourth team gaining entry via the inter-confederation play-off.

Three winners of the second round, as well as the five top teams (ranked 1-5 based on the FIFA rankings of July 2020) will compete in the third round. The top three teams get direct qualification. The fourth place team advances to the inter-confederation play-offs. The eight participating teams are: Costa Rica, El Salvador, Honduras, Jamaica, Mexico, Panama, and the U.S.

Oceania Football Confederation (OFC) has one inter-confederation play-off spot available. The top four teams will advance to the knockout phase — a two-leg match. They will then meet in the final.