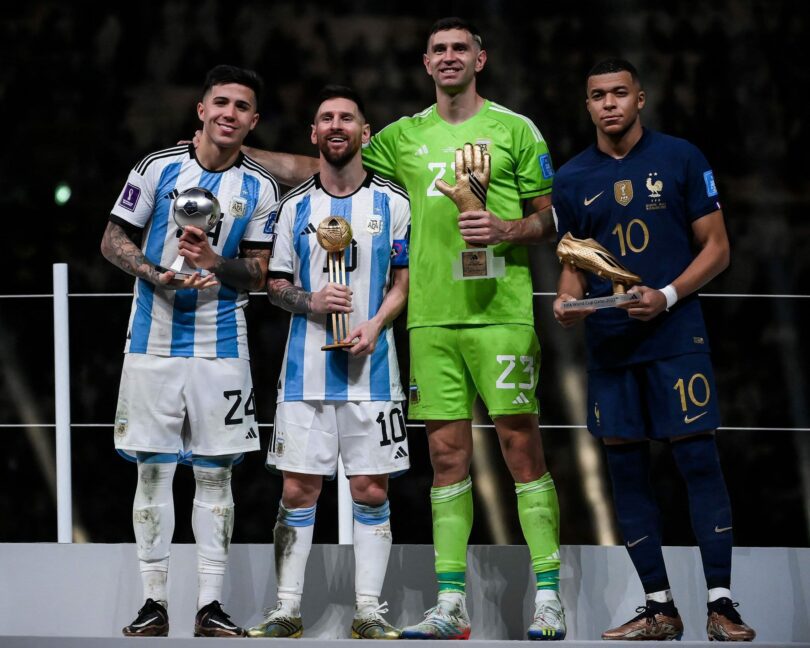 FIFA has announced a number of awards in recognition of the superb performance during the 29 days of anticipation, celebration and heartbreak in Qatar. Awards include the Golden Boot, Golden Glove, Golden Ball, Young Footballer of the Year awards and Fair Play.

Mbappe, Giroud, Enzo Fernandez, E. Martinez and Messi all received awards for their individual achievements at the 2022 World Cup during the presentation ceremony after the final at Lusail Stadium in Lusail, Qatar.

Argentina beat France 4-2 on penalties to qualify for the 2022 World Cup. This is the third time Argentina has won the World Cup after 1978 and 1986. Messi, the beating heart of ‘Albiceleste, becomes the First player to score in all-five different stages of the World Cup. It was a fairy tale ending for Argentina after the enchanting final.

Argentina took a 2-0 lead by the 80th minute when Mbappe’s double in just 90 seconds almost ended all hopes of lifting the cup. The fight continues in extra time, where Messi scored his second and Mbappe hits an equalizer making it 3-3.

But on penalties, Argentina beat France 4-3. France has a golden opportunity to defend the title and win the world cup for the second time in a row. It was all Kyllian Mbappe who showed superhuman skills to win the trophy again but Argentina master Lionel Scaloni had a different strategy to stop the Blues and his boys fought to the second. finally and execute his plan to win the World Cup 2022.

Kylian Mbappé is a French professional who plays as a forward for Ligue 1 club PSG (Paris Saint-Germain) and the France national Football team.

Lionel Andrés Messi also known as Leo Messi, is an Argentine professional footballer who plays as a forward for Ligue 1 club PSG (Paris Saint-Germain) and is captain of the Argentina national team.

Enzo Jeremías Fernández is an Argentinian professional footballer who plays as a central midfielder for Premier Ligue club Benfica and the Argentina national Football team.

Damián Emiliano Martínez is an Argentinean professional footballer who plays as a goalkeeper for Aston Villa a Premier League club and the Argentina national Football team.

England lost in the Quarter-final of the FIFA World Cup 2022. The Qatar campaign of the ‘Three Lions’ ended in tears after Gareth Southgate’s side suffered a 2-1 loss to defending champion France. However, the England Football team has been awarded the FIFA Fair Play Award.

Olivier Giroud is a French footballer who plays as a striker for Serie A club AC Milan and the France national Football team.