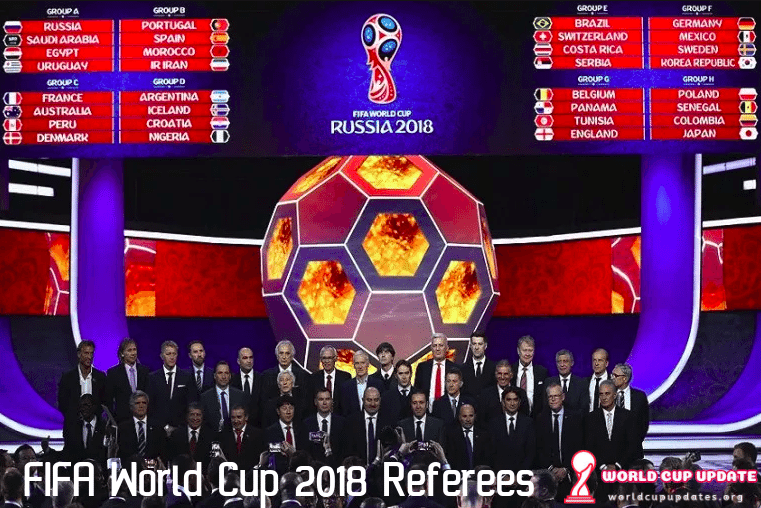 FIFA World Cup 2018 Referees & their Pay Scale: The much awaited FIFA World Cup 2018 Tournament is going to kick start soon in the month of June, where the 32 participating teams are busy with their preparation for the competition. This year the tournament will be hosted by Russia which will have total 64 matches played against the best teams across the world.

Star Football players are all set to showcase their skills in front of millions of spectators, but apart from the key players there will be one man standing in the middle of the field : the referee. His decisions will certainly put a lot of effect on the overall game play.

So here in this article we have specially covered about who will be the FIFA World Cup 2018 Referees and How much are they paid.

Salary Of Every Coach In 2018 FIFA World Cup

The 21st FIFA World Cup is about to begin and the 32 coaches have started. Have you ever wondered how much these coaches earn each year? Well, every manager receives a paycheck. It is not easy to manage a national football team, especially in football, when you have many things to do. It pays the players a lot but what about coaches? The World Cup will have names of coaches with players such as Joachim Low, Tite, Julian and Stanislav Cherchesov. All these coaches have the enormous responsibility, pressure, expectations, and everything about winning prestigious football titles. Get ready because World Cup Updates offers you a list of the salaries of 32 coaches at the FIFA World Cup.

FIFA has already revealed the identities of the World Cup Referees comprising of 36 individuals from across the globe who will officiate the 2018 event. The referees are selected from the six continental federations. The maximum number of referees will be from the European governing body UEFA constituting 10 in number. However this time there is not a single British Official in the entire panel amid the threats of a United Kingdom boycott.

The AFC, CAF, CONCACAF and CONMEBOL confederations each have six representatives, while the OFC has just two.

In the Football World Cup Tournament each Referee is associated with a small team of assistants and thereby FIFA has confirmed total 63 Assistant Referees for the coming tournament.

Generally speaking, the officials who have been selected – both referees and assistants – will be deployed in a number of different roles, such as assistant referee, fourth official and video assistant referee.

FIFA has yet not revealed the amount of pay scale that will be granted to the referees and assistant referees at the World Cup, but according to the reports they will receive a fee plus extras per game. The most experienced and qualified referees will be paid $70,000 for their services at the World Cup with a further $3,000 per game officiated.

The same report says that assistant referees will receive a lower fee of $25,000 with an extra $2,000 per game.

Which Referees will Officiate Each game?

As the preparations for the upcoming FIFA World Cup 2018 are still going on, Federation has not yet appointed match officials for the World Cup games. The Final FIFA Referee Seminar before the onset of the World Cup is set to take place on 4th June 2018, which will be 10 days before the opening game between hosts Russia and Saudi Arabia.

It is for sure that the World Cup 2018 Football event will have the most experienced and qualified Referees which will take charge in important and bigger matches of Knock out stages and Final.

Germany coach who led his team to the World Cup four years ago and his first FIFA Confederations Cup title tops the list. The German coach receives £ 3.31 million a year to manage the defending champions. He has been running Germany since 2006. During this period, he scored 370 games, 206 of them winning 55.68%.

In the second place, our Brazilian coach Tate and French coach Didier Deschamps have the same salary. Tite plays a major role in Brazil’s dominant performance in the 2018 FIFA World Cup qualifier. He has proved himself in the management of Brazil’s perfectly balanced team to compete for the world title in Russia. French coach Didier Deschamps has been a French coach since 2012 and continues his service to the national team. Led his team to reach the quarterfinals of the final and final World Cup of the 2016 Euro.