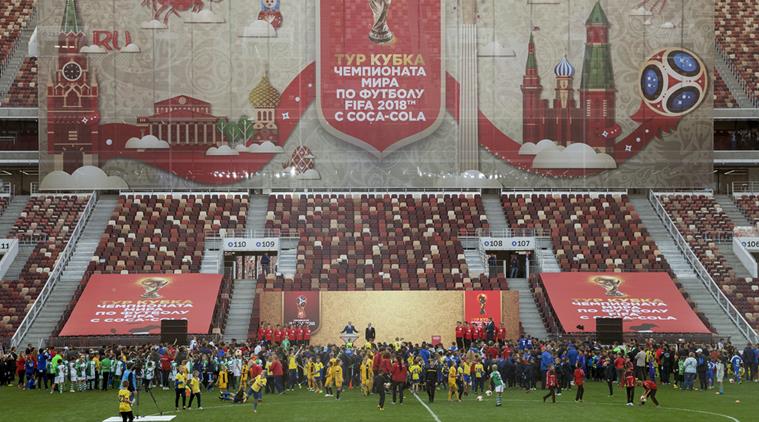 The pricing of the tickets of the biggest football tournament, FIFA World Cup 2018, starts from Rs 6710, with the highest price at Rs 70502 in Indian currency. The tournament begins on June 14 with Russia playing the opener at the Luzhniki Stadium in Moscow.

Tickets for next year’s World Cup in Russia will go on sale from Thursday with prices ranging from $105 for the cheapest seats at group stage matches to $1,100 for the most expensive seats at the final, FIFA said on Tuesday.

The first phase of ticketing for the next FIFA World Cup, which will take place in Russia, is set to begin on Thursday. The pricing of the tickets of the biggest football tournament starts from Rs 6710, with the highest price being Rs 70502 in Indian currency.

FIFA secretary general Fatma Samoura said the ticketing system will give fans “a fair chance” to secure tickets for the June 14-July 15 extravaganza. The sales process has been divided into two phases. During the first period, which starts on Thursday and finishes on 12 October, fans will be able to submit their ticket applications. 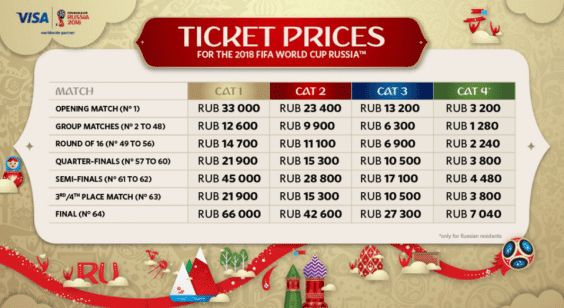 All applicants will be duly notified of the outcome of their applications before the second phase gets underway after the draw for the finals takes place on December 1.

*prices converted from USD to GBP based on current exchange rates

**prices converted RUB to GBP based on current exchange rates

Here are the prices in INR for various categories in the most awaited football tournament. Other than the below categories, there is also one for Russian citizens.

The tournament begins on June 14 with Russia playing the opener at the Luzhniki Stadium in Moscow. So far, Belgium, Brazil, Mexico, Iran, South Korea, Japan and Saudi Arabia have qualified for the World Cup 2018, other than the host country.

FIFA said there would also be a Category 4 price band, available only to Russian residents at discounted prices varying between 1,280 roubles ($22.19) for group stage games to 7,040 roubles for the final. A similar policy was used in Brazil in 2014.