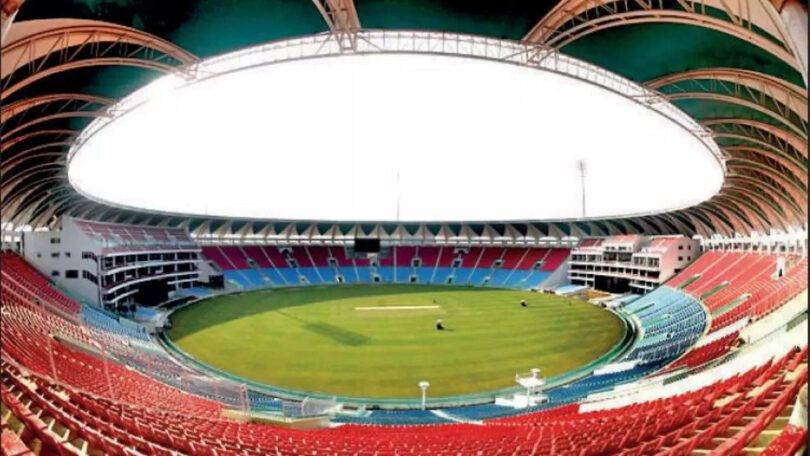 With a seating capacity of over 50,000, it became the fifth-largest international cricket stadium in India. Formerly known as the Ekana International Cricket Stadium, it was later renamed after the former Indian Prime Minister, Shree Atal Bihari Vajpayee.

The stadium has the longest straight boundaries compared to other stadiums in India. The pitch is grassy which makes it a pace bowler favourable pitch, The grass on the pitch reduces the roughness of the pitch that allows the ball to swing thereby making it a favourable pitch for pace bowlers. However, this pitch doesn’t adapt for spin bowlers as the ball doesn’t grip the ground.

Follow us on Google News For More Cricket Updates

In July 2019, the Cricket Board of India (BCCI) approved it as the third home ground in India for Afghanistan National Cricket Team.

Lucknow and UP cricket fans are delighted that the T20 match of the New Zealand Vs India Series tour is taking place at Ekana Stadium. So fans have been searching for tickets for Ind vs NZ Lucknow for a long time in 2023. This stadium has a capacity of 50,000 visitors.

Fans are looking for Tickets to Bharat Ratna Shri Atal Bihari Vajpayee Ekana Cricket Stadium. During matches and events, the demand for Ekana Stadium tickets is very high. We have shared the ticket information once it is official. We also provide information on Lucknow Super Giants‘ Match ticket prices where available.

Bookings for January 29, 2023, T20 will start soon and more tickets will go on sale. So those who want to watch India vs New Zealand Lucknow T20 should book Ekana Stadium tickets in advance.

We will update the Ticket information as soon as the Ticket booking goes live.

As per the schedule, the series will begin on January 3rd onwards which includes a series of matches of T20, ODI and Test. Out of the multiple matches which are to be conducted in different cities of India, the 2nd New Zealand vs India T20 will be played in the Ekana Stadium of Lucknow on January 29.

Here are the list of upcoming test series of Indian Cricket Team:

Schedule for India vs New Zealand.

Schedule for India vs Australia Test 2023:

Schedule for India vs Australia ODI 2023: