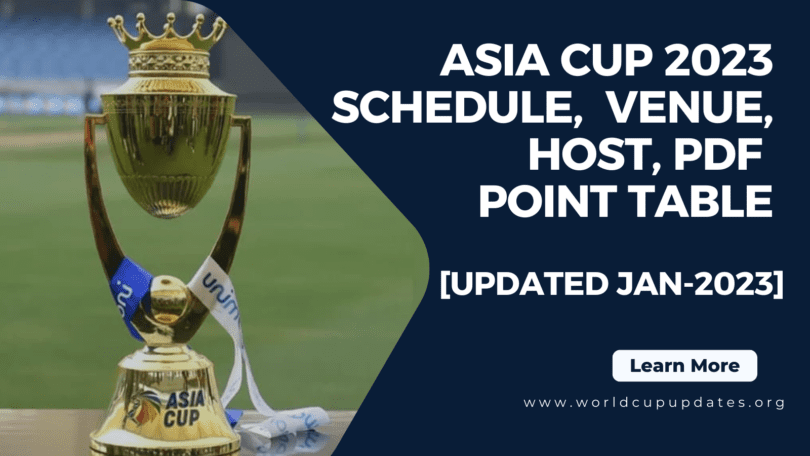 Asia Cup 2023: Venue, Squad, Format, Predicted Schedule and List of Winners. The Asian Cup, considered the first multinational cricket tournament in which Asian countries participate, will be held in Pakistan for its 16th edition, in the second half of 2023. According to the Future Tour Program (FTP) announced by the ICC, Pakistan was chosen as the exclusive venue for this tournament.

According to the FTP,  a fierce battle between Asian cricket teams is expected. The 2023 Asian Cup will be held in ODI format as the ICC Men’s Over 50 World Championship will be held after the Asian Cup.

Get More updates on your mobile: Follow Us on Google News

The Asian Cup will have Pakistan as the official host country. According to sources, the 2023 Asian Cup will move from Pakistan to a venue that does not favour any team. The ACC will meet immediately to define the area.

The 15th edition of the Asian Cup was recently held in the United Arab Emirates from August 27 to September 11. Sri Lanka beat Pakistan to win the Asian Cup for the second time. 6 and for the first time in the T20 format.

India failed to reach the final, after losing to Pakistan and Sri Lanka in the Super 4 round. The most positive thing for India is the return to the form of Virat Kohli, who has marked a century in cricket internationally after nearly 1000 days.

The Asia Cup 2023 full schedule is not yet out. It is expected to be announced in June-July of 2023. But, as per the Future Tour Programs of ICC, the tournament will be organized in September 2023. Given below is the Asia Cup 2023 predicted schedule:

Although the Asian Cricket Council has announced that Pakistan will be the host country of the 2023 Asian Cup, it looks like the tournament will be moved to a neutral venue.  BCCI Secretary Jay Shah has publicly stated that India will not go to Pakistan for the Asian Cup due to the not-so-good political situation between the two countries.

Asian Cup 2023 will be a 50-50 ODI Format. 13 matches will take place. Top 5 teams that are India, Pakistan, Bangladesh, Sri Lanka and Afghanistan qualified for the main event. The 6th-place team will be determined from the 2023 Asian Cup qualifiers. The tournament will take place in a one-leg round-robin format, with each team playing against the other teams once in the group stage, followed by a super 4-round qualifier.

The following is a list of the anticipated teams that will take part in the Asia Cup:

The Asia Cup will be conducted in Pakistan, according to the Asian Cricket Council (ACC), but the exact date has not yet got determined.