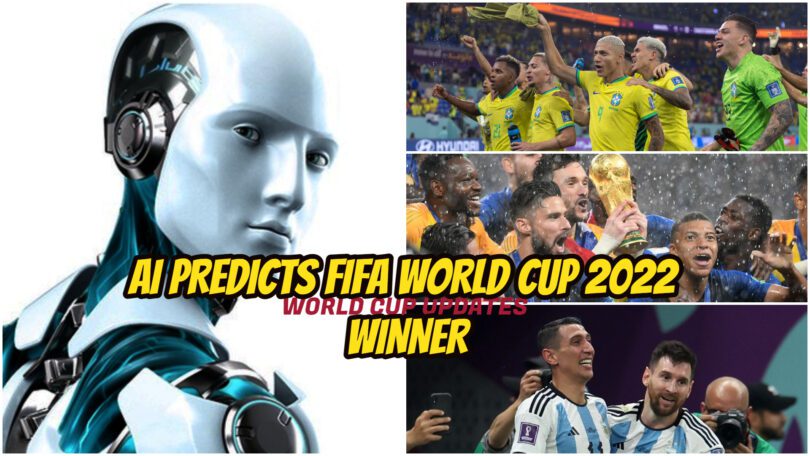 How This Artificial Intelligence Works:

The researchers extracted data from a dataset gathered by GitHub user martj42. The data contains results and statistics for every international match since 1872. They included data on all results. International results since the 2002 World Cup into the model, while also looking at recent form and FIFA rankings.

The model then uses Bayesian statistics to predict the most likely score for each match of the 2022 FIFA World Cup. Bayesian statistics, based on Bayes’ theorem, are one method. a reliable method for determining the probability of random events.

Applying this method to this year’s World Cup schedule in 100,000 simulations, the Artificial Intelligence ​​model chose Brazil as the most likely team to win, with a staggering 25% probability.

Belgium is second, Argentina third, France fourth and England fifth after 100,000 simulation rounds. Spain, the Netherlands, Denmark, Portugal and Croatia occupy the next five places as predicted by Artificial Intelligence.

However, the team admitted that they could not account for some things, such as the weather, individual excellence and penalties.

“After experiencing the success of our model in predicting the 2014 and 2018 World Cup results, we decided to use all international results from the 2002 World Cup onwards,” the Institute’s team said. Alan Turing researchers said.

They further added, “In our coaching data, we give more preference to (weight). The most weight to World Cup matches (then reduce the weight to continental tournaments, qualifiers and friendlies). While at the same time we also pay more attention to recent matches. We also incorporate official FIFA rankings into our model to provide up-to-date estimates of team performance.”